Congress president Rahul Gandhi on Tuesday accused Prime Minister Narendra Modi of 'treason' and violating the Official Secrets Act by acting as Anil Ambani's 'middleman' in the Rafale jet contract, citing an email to claim the businessman was aware of the deal days before India and France finalised it. 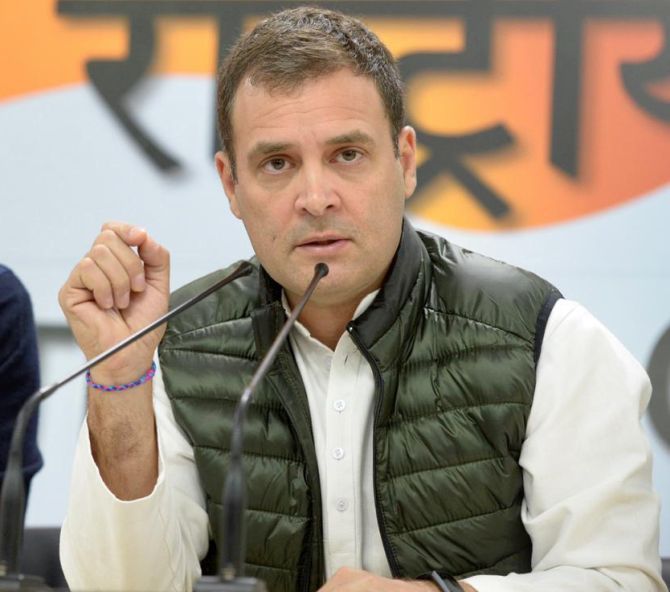 The Bharatiya Janata Party, however, rejected the charge, saying the email purportedly by an Airbus executive referred to a helicopter deal and not Rafale.

Reliance Defence, in a statement, also refuted Gandhi's allegation saying the 'proposed MoU' mentioned in the email referred to its cooperation with Airbus Helicopter.

At a press conference, Gandhi released to the media the email dated March 28, 2015, purportedly written by Airbus executive Nicolas Chamussy to three recipients with the subject line 'Ambani'.

He claimed the email showed Ambani visited then French defence minister Jean-Yves Le Drian's office and mentioned an 'MoU in preparation and the intention to sign during the PM visit (to France)'.

WATCH: 'CAG report is worthless and I would term it as Chowkidar Auditor General Report'

The Congress president asked how Ambani knew about the deal and mentioned it in the French defence minister's office when even then foreign secretary S Jaishankar and then defence minister Manohar Parrikar had no information on it.

"This is a breach of the Official Secrets Act. The prime minister who is the only other person who knows about the deal has informed Anil Ambani about the deal. The Prime Minister is acting as Anil Ambani's middleman," Gandhi alleged and called for a criminal investigation into the matter.

According to Gandhi, it was earlier an issue of corruption, of procedural inconsistencies but was now a matter related to the Official Secrets Act which he said was 'much more serious'.

"This is now treason, nothing less. Mr Narendra Modi is doing what spies do. He is informing somebody of defence matters, he is under oath to protect these secrets.

"He has now given this secret to Mr Anil Ambani who knows that the biggest defence deal in the world is going to him 10 days before the deal...this itself is criminal, this itself will put the prime minister in jail," the Congress chief said.

Rebutting Gandhi's allegations, Union minister Ravi Shankar Prasad said his party had serious differences with former prime ministers, who came from the Gandhi family, over several 'murky' defence deals signed during their term but had never accused them of treason. 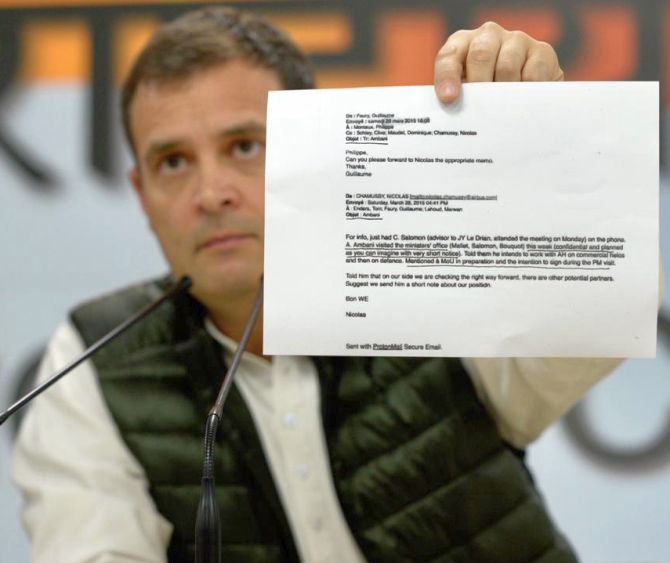 IMAGE: Gandhi shows a copy of an e-mail at a press conference. Photograph: ANI

"He (Rahul Gandhi) has thrown muck at his own face by abusing our honest prime minister... We will expose his lies before the public," he said.

Addressing the press conference, Gandhi also slammed the yet to be tabled Comptroller and Auditor General report on the Rafale deal, and dubbed it 'Chowkidar Auditor General' report.

He reiterated that there will no doubt in anybody's mind that the prime minister is a 'corrupt man' and he has helped Anil Ambani.

Gandhi read out the email at the press conference, quoting it as saying that Ambani visited the defence minister's office and 'told them he intends to work with AH (Airbus Helicopters) on commercial helos and then on defence. Mentioned (an) MoU in preparation and the intention to sign during the PM visit'.

"This is an e-mail written by an executive of Airbus where he is clearly stating that Mr Anil Ambani met the Defence Minister of France and told them ten days before the Rafale deal was signed that he was going to get it. Now the Prime Minister of India needs to explain this to people," the Congress chief said.

"Why don't you (the government) allow a JPC...you can investigate us as much as you want," he said in response to a question.

"So, all these three are going to be investigated," he said without elaborating on the future course of action.

On another question that BJP is alleging that the Congress does not respect institutions like the CAG, Gandhi said: "No, We don't say, we don't respect the CAG.

"We say that there is so much evidence in Rafale now including this email when Mr Anil Ambani is negotiating on behalf of Mr Narendra Modi. That this stuff needs to be taken in to account in the CAG report and it is obviously not being taken into account."

"And we are also saying that the gentleman (Comptroller and Auditor General Rajiv Mehrishi), who is making the CAG report, is part of this decision. So, he cannot possibly give a proper report. We are not questioning the institution of the CAG," Gandhi said..

Reliance Defence on Tuesday said the “proposed MoU” mentioned in a purported email cited by Congress president Rahul Gandhi in his fresh allegations on the Rafale deal was a reference to its cooperation with Airbus Helicopter and had “no connection” with the fighter jet contract.

“Purported email being referred by the Congress Party is regarding the discussion between Airbus and Reliance Defence regarding Civil & Defence Helicopter Programs under ‘Make in India’,” a Reliance Defence spokesperson said in a statement.

“The discussion on proposed MoU was clearly with reference to cooperation between Airbus Helicopter and Reliance. It had no connection whatsoever with Government to Government Agreement between France and India for 36 Rafale aircraft,” the Reliance Defence spokesperson said.

It is in public domain that Airbus Helicopter has partnered with Mahindra for the Military Helicopter Programme, the spokesperson added.

“Also, for the record, the MoU for Rafale aircraft was signed between France and India on January 25 2016 and not in April 2015.

“From the above, it is evident that the facts are being deliberately twisted and reality being ignored,” the company said.