There is buzz that the PM, confident of an election victory, will introduce 25 new ministers. 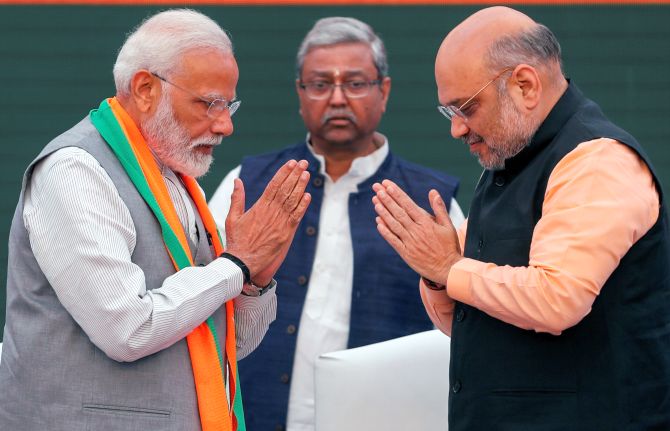 Prime Minister Narendra Damodardas Modi recently confided to his confidants that the Bharatiya Janata Party will return to power on May 23, 2019.

And so confident is the PM of victory that he is already looking to the future -- his council of ministers.

Modi plans on introducing 25 new and young faces as ministers.

BJP national President Amit Anilchandra Shah will not be added to the Union Cabinet as he wants to continue in his current post.

Sushma Swaraj, India's present external affairs minister, who has announced that she will not contest the Lok Sabha election, could be sent to the United States as India's ambassador.

Rajnath Singh will continue as home minister whereas Arun Jaitley will be handed another portfolio -- perhaps, external affairs.

Nirmala Sitharaman, the current defence minister, will be shifted to another key portfolio and the high performing Nitin Gadkari could be given defence.

Currently serving as the railway minister, Piyush Goyal will be India's next finance minister -- that is, if the BJP wins a majority in the Lok Sabha when votes are counted on May 23.

The swearing-in of the new BJP government could be moved from New Delhi to the banks of the Ganga in Varanasi, which is also Modi's Lok Sabha constituency.

Modi and Shah have discussed plans to introduce new faces as governors across the country.

Modi is keen to bring in Dr Hasmukh Adhia, who retired as the economic affairs secretary, as his principal secretary during his second term.

There is also buzz in the capital about a new national security advisor being appointed in Ajit Kumar Doval's place.