The MNS chief unveiled his party's new flag which is completely saffron and bears King Shivaji's royal seal.
He also questioned how many of the Muslims taking part in the protests were Indian.

Maharashtra Navnirman Sena chief Raj Thackeray indicated on Thursday that he was set to appropriate his late uncle Bal Thackeray's Hindutva cause, unveiling his party's new saffron flag and declaring support to the National Democratic Alliance government for evicting Pakistani and Bangladeshi 'infiltrators'.

He also announced that the MNS would take out a protest march on February 9 seeking eviction of illegal migrants from Pakistan and Bangladesh.

Earlier in the day, the MNS chief unveiled his party's new flag which is completely saffron and bears King Shivaji's 'rajmudra' (royal seal).

"I am a Marathi and a Hindu too. I have not changed my religion....If you try to mess with the Marathi in me, I will go after that person as a Marathi, and I will go after him as a Hindu if one messes with the Hindu in me," Raj said at the valedictory session of the party's plenary meeting in Mumbai. 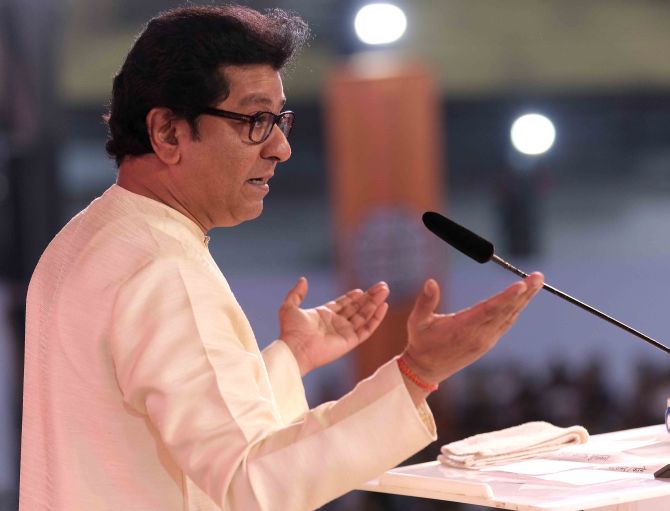 IMAGE: In a veiled dig at Uddhav, his estranged cousin, Raj said, 'I don't change the colour of my party to form the government'. Photograph: Sahil Salvi

Downplaying speculation about his ideological shift towards Hindutva from his earlier 'Marathi manoos' and son-of-the-soil agenda, he said he had this flag design in mind since the launch of the MNS.

Its unveiling amid the current political situation was a 'pure coincidence', he said.

The Shiv Sena, from which Raj carved out his own party, is known for its Hindutva ideology. But the Uddhav Thackeray-led party did a radical about-turn last year when it ditched the BJP and formed government in Maharashtra with the Congress and the Nationalist Congress Party.

In a veiled dig at Uddhav, his estranged cousin, Raj said, "I don't change the colour of my party to form the government."

Raj also said in his speech that the Muslims who are 'honest' towards the country 'are ours'.

His party -- which had launched a strident anti-North Indians agitation in its early years -- never forsake Hindutva, Raj claimed.

"We are facing such a great internal threat (from illegal migrants) that Indian soldiers may have to fight them instead of (the enemy) on the border," the MNS chief said. 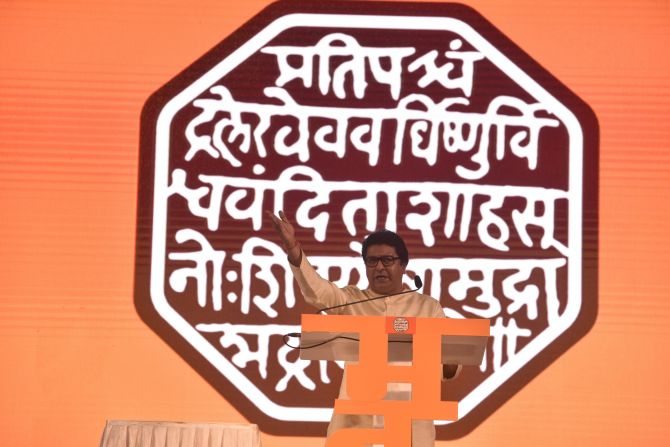 IMAGE: He also unveiled a new flag of the party which is seen in the background. It is completely saffron and bears King Shivaji's royal seal. Photograph: Sahil Salvi

He noted that Muslims have hit the streets to march against the CAA in large numbers.

"Some people told me the reason behind the protests: they are angry that Article 370 was scrapped, there is anger against the (Supreme Court's) Ram Temple verdict. And that pent-up anger is being expressed," Raj said.

He questioned how many of the Muslims taking part in the protests were Indian.

"And if the Indian Muslims are going to support them (foreigners), why should we support you?" he asked.

Seeking to drive out 'infiltrators', Thackeray also called for stopping the 'Samjhauta Express' that runs between India and Pakistan.

Softening his stance towards Modi, Thackeray said he criticised the prime minister when the latter was 'wrong' and 'congratulated' him when he took right decisions.

He will meet Union Home Minister Amit Shah and Maharashtra Chief Minister Uddhav Thackeray to share some information about Muslim clerics 'infiltrating parts of the state and hatching conspiracy against the country', the MNS chief said.

The information came from the police, he claimed.