Cycling almost 1,200 km with a debilitated person riding pillion could be a daunting task even for professional athletes, leave alone an ordinary teenager and that too amid the COVID-19 pandemic. 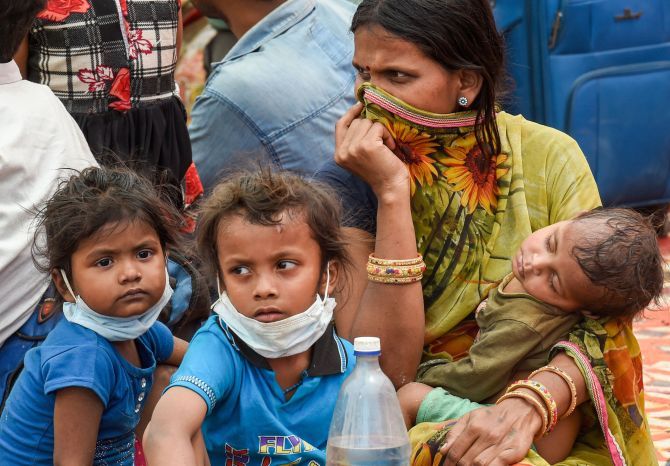 IMAGE: A migrant family lodged at a camp by the Uttar Pradesh government, during ongoing COVID-19 lockdown, at Dadri in Gautam Buddha Nagar district, on Wednesday. Photograph: Atul Yadav/PTI Photo

In this case, the heavily-stacked odds against Bihar girl Jyoti Kumari were no match for her grit.

Kumari, a lion-hearted 15-year-old, cycled all the way from Gurugram in Haryana to Bihar's Darbhanga district with her incapacitated father Mohan Paswan seated on the carrier.

Now the father-daughter duo is at a quarantine centre near their village Sirhulli under Singhwara block of the district.

Kumari is determined not to let her father return to Gurugram where he was driven to penury following an accident a few months ago that rendered him unfit to make a living as an e-rickshaw driver.

Paswan said his landlord gave him an ultimatum to either pay the rent that was due for a few months, or leave.

"I succeeded in buying time on a couple of occasions. I promised him that I would take up whatever job I could land once the lockdown was lifted, earn money and pay all his dues.

"We were so hard pressed that I had to discontinue my medicines so that we could afford one square meal a day. How could we have arranged money for rent?" he recounted.

At that time Jyoti was looking after her father in Gurugram while her mother was taking care of her four younger siblings back in the village while working as an Aanganwadi worker.

"Amid the gloomy situation, Jyoti suggested that we return home. I pointed out that we would not be able to find any trains or buses soon and my condition would not allow me to walk.

"She said we should get a bicycle," said Paswan, his face betraying the sense of bewilderment he felt when she first came up with the suggestion.

He tried hard to dissuade his daughter, telling her that the journey was not a matter of 10, 20 or even 100 km and that driving a bicycle with a pillion rider much heavier than herself was no mean feat. But Jyoti persisted.

"Battered by misfortune, I had become a fatalist. I gave in to her pestering and purchased a used bicycle with the help of whatever savings we still had. And then we hit the road," Paswan said.

Jyoti said they would cycle for 30-40 km a day and at a few places truck drivers gave them lifts.

"It was unbearably tiring. We would stop by for a quick bite at places where we could spot unlucky ones like us being fed by local Samaritans.

"At a few spots, we hitched rides on trucks. Drivers, taking pity on us, would help by dropping us to a point from where our paths diverged," recalled the girl.

"It must have taken eight days... and then, here we were! Back home!" said an elated Jyoti, her fatigue making it difficult to remember the date on which they had started.

The father smiled with a hint of pride when asked about her daughter being compared in the local media to the character of Shravan Kumar from the epic Ramayana, who took his old and frail parents on a long pilgrimage with his mother and father seated in baskets hanging at the ends of a pole he carried on his shoulders.

"She is indeed my Shravan Kumar. The journey back home has been nothing short of a pilgrimage. Having arrived feels like salvation," Paswan said.