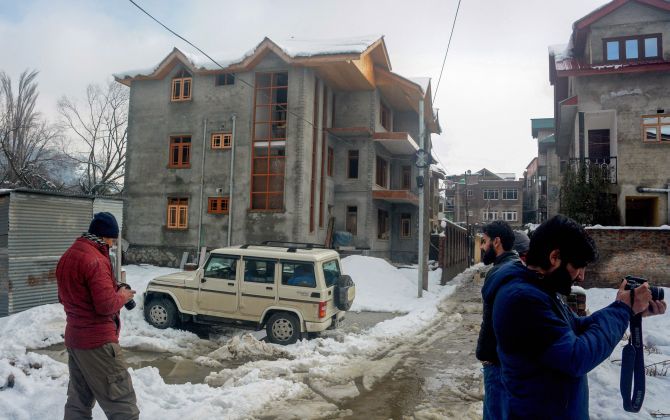 The Union home ministry has asked the National Investigation Agency to initiate the process of probing the case of suspended Jammu and Kashmir Police deputy superintendent Davinder Singh, who was caught in south Kashmir while ferrying two terrorists to Jammu last weekend, officials said on Thursday.

The formal notification of handing over the case to the NIA is expected to be issued by the ministry soon, an official privy to the development said.

Necessary formalities are being completed in Jammu as well as in Delhi before the probe agency takes over the case.

The NIA has been credited with breaking the nexus between stone pelters and separatists in Jammu and Kashmir.

Some NIA members, posted in the Union Territory of Jammu and Kashmir, were present during the preliminary questioning of Singh and three others -- Naveed Babu, a self-styled district commander of banned terror outfit Hizbul Mujahideen, his associate Atif Ahmed and a lawyer, Irfan Ahmad Mir, who has been named as an active overground worker for terror groups by police.

The officials said all records would be handed over to the NIA after the case is registered by the agency.

Singh, who was arrested along with the three other people on Saturday, had ferried Babu to Jammu last year and facilitated his return to Shopian after 'rest and recuperation'.

He is believed to have taken Rs 12 lakh for 'smuggling' the two terrorists to Chandigarh and arrange for their accommodation for a couple of months, the officials said.

Mir, who was driving the vehicle when he along with the others were caught by the police from a national highway in Kulgam district, may become a prize catch for the NIA as it is alleged that he was carrying orders from Pakistan.

He had visited the neighbouring country five times on an Indian passport.

Airports in Srinagar and Jammu are to be 'immediately' brought under the security cover of the Central Industrial Security Force (CISF) in view of the arrest of Davinder Singh, a Jammu and Kashmir government order has said.

The two sensitive airports are to be 'handed over' to the CISF by January 31, the order of the Jammu and Kashmir Home Department to the Director General of Police (DGP) said.

'This issue (CISF security at Srinagar and Jammu airports) has acquired immediacy in view of the recent developments relating to the arrest of Davinder Singh, DSP airport security, for trying to assist militants to travel to other parts of the country,' the order issued on Wednesday said.

The two airports are guarded by the Central Reserve Police Force and the J-K Police at present.

The Union government had last year decided that the CISF will be handed over security of these two airports along with the one in Leh in view of their sensitive and strategic location and the threats it faced related to possible terrorist and hijack attempts.

CISF is the national civil aviation security force and at present it guards 61 airports including the ones at Delhi and Mumbai.

PTI had on January 13 reported that the Union home ministry sanctioned about 800 personnel to the CISF in order to take over security duties at the three airports of the newly created Union Territories of Jammu and Kashmir and Ladakh.

As per the original plan, the CISF was to take over Jammu airport by next month and the Srinagar and Leh airports after the spell of severe cold ends.

However, officials said, keeping in mind the arrest of the DSP and his alleged links, the latest order has been issued which also directs the J-K Police to make arrangements for accommodation, transport and other logistical requirements of the armed contingent of the CISF on a quick basis.

Once inducted at the most-sensitive Srinagar airport, the CISF will secure access control at both city and air side (tarmac area) while the CRPF will be responsible for securing the outer periphery.

At the Jammu airport, the peripheral security duties will be rendered by the J-K Police.

An assortment of surveillance and security gadgets like CCTVs, observation monitors, hand-held metal detectors, bullet-proof patrol vehicles and bomb detection and disposal equipment are also being provided by the airport operator, the Airports Authority of India (AAI), to the CISF.

The Union government sometime back made it clear that CISF will be the only civil airports guarding force and all such facilities in the country will be gradually brought under its command to bolster aviation security and tighten anti-terror and anti-hijack protocols.