Merkel's party misses majority in Germany, uncertainty over next leader

Germany's left-leaning, Social Democrats Party (SPD) won in the German federal election with over 25 per cent votes, but uncertainty remains over the next leader as results showed that the party won narrowly. 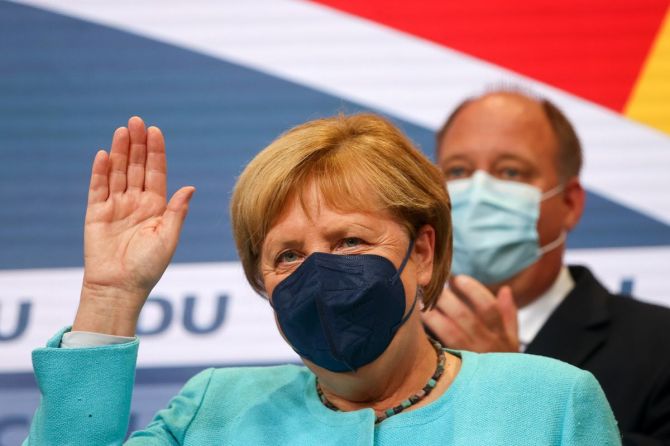 According to the Federal Returning Officer, with all 299 of Germany's electoral districts reporting, the SDP won 25.7 per cent of the vote, beating out the Christian Democratic Union (CDU), the centrist-right, Conservative Party of Chancellor Angela Merkel, which took 24.1 per cent, reported CNN. The results show that there is still uncertainty over who will be the next leader of Germany. Merkel, who over 16 years cemented her position as one of the world's most successful political leaders, will stay in the job until a coalition deal is negotiated.

Both the SPD and the CDU with its coalition partner, the Christian Social Union (CSU), have said they want to begin coalition negotiations to form a new government.

Likely coalitions in Germany will either see the SPD or CDU/CSU forming a government with the Green Party, which took 14.8 per cent of the votes and the liberal Free Democratic Party (FDP), with 11.5 per cent, reported CNN.

SPD leader Olaf Scholz said voters wanted him to be the next chancellor.

The 63-year-old politician has served as the vice-chancellor and German finance minister in Merkel's grand coalition government since 2018, earning him increased visibility as he navigated Germany's economic response to the pandemic, reported CNN.

"Pragmatism, optimism, unity that is what we will show because that is what counts, and I am sure the citizens will also be happy post-election about their decision," Scholz added.

By contrast, the CDU leader Armin Laschet told supporters, the party "cannot be content with this result," while noting that the final result remained unclear.

The party had campaigned on a message of stability for the country after Merkel, seen as a steady pair of hands over the past nearly 16 years, steps down. But it is now coming to terms with what it itself called a bitter night of losses.

Meanwhile, Greens' leader Annalena Baerbock said the party "led a campaign as we have never before experienced in this country -- around the clock, until last night, the last second."

Environmental concerns and economic worries have emerged as key issues in campaigning, with the former fuelled by the deadly floods that devastated parts of Germany this summer, reported CNN.

The Alternative for Germany (AfD's) lead candidate for chancellor, Alice Weidel, put on a brave face after exit polls showed a drop in support for the far-right party. Preliminary official results put the count at 10.3 per cent of the vote, down from 12.6 per cent in 2017.