Olaf Scholz has been appointed as Germany's new Chancellor on Wednesday, bringing an end to Angela Merkel's 16 years of leadership. Scholz, the leader of the Social Democratic Party (SPD), won the secret vote in the Parliament as expected, a culmination of months of negotiations following the SPD's narrow victory in September's federal elections, CNN reported. According to CNN, following the ceremonial protocols, Scholz went to see German President Frank-Walter Steinmeier who officially appointed him as the country's new Chancellor. He will be sworn in at the Parliament later on Wednesday.

Scholz has served as the Labor and Social Affairs minister in Merkel's first coalition government in the late 2000s. In 2011 he was elected mayor of Hamburg, a position he held -- with high levels of support -- until 2018.

Since then, he has served as the vice-chancellor and finance minister in Merkel's grand coalition government, a powerful position in German national politics.

The US media reported that Scholz, who has formed a three-party coalition with the Greens and pro-business Free Democrats, has positioned himself as a pragmatist and a safe pair of hands. He is seen as a moderate and centrist, which has made him somewhat of an outlier within his party.

"Scholz seems to partly owe his success [in the election] to posing as [Merkel's] worthy heir during the campaign, calm and unassuming -- and with his hands folded into a Merkel-style rhombus in a picture that went viral," CNN quoted Holger Schmieding, the chief economist at Berenberg Bank. Schmieding wrote this in an analyst note on Wednesday.

"Such imitation is probably the best compliment he could have paid her. Despite some ups and downs during her long reign, Merkel leaves office as the most popular politician in the country, with 69% approval," Schmieding added. 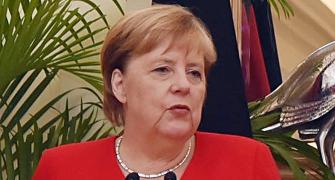 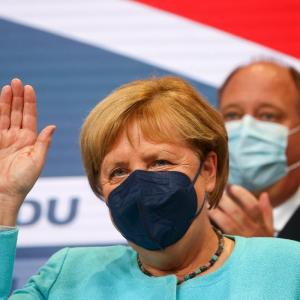 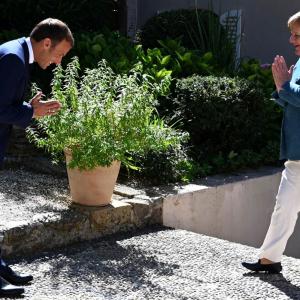 Macron, Merkel switch to Namaste in times of Covid