Large swathes of north India witnessed a marginal drop in maximum temperatures on Monday and the weather department said thunderstorms and rain in parts of the region over the next few days are likely to bring further respite from the scorching heat. 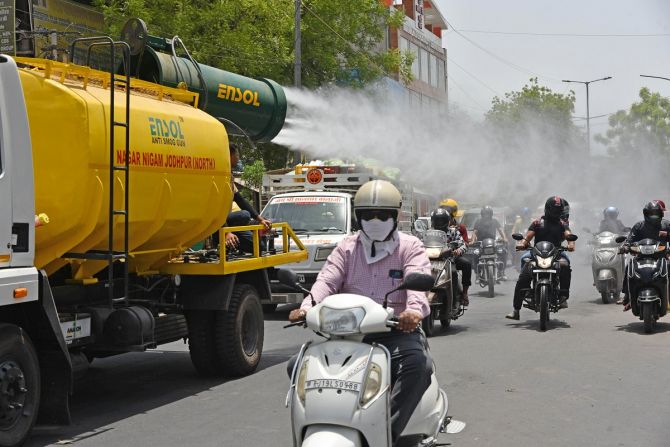 IMAGE: The civic body spraying water on the road to beat the heat during a hot summer day, in Jodhpur, May 15, 2022. Photograph: ANI Photo

The mercury in Delhi, which recorded its hottest day of the year so far at 45.6 degrees Celsius on Sunday, came down to 42.4 degrees Celsius, according to the India meteorological department.

The IMD said a thunderstorm or a dust storm may further bring the mercury down by a few notches on Tuesday.

The temperature will start rising again on Wednesday and may hit the 45-degree mark on Friday, it said.

Maximum temperatures in Haryana and Punjab too came down by a few notches, even as they remained well above normal.

In Punjab, Amritsar recorded a high of 42.6 degrees Celsius, down four notches from Sunday.

Chandigarh, the common capital of the two states, recorded a high of 41 degrees Celsius.

The Meteorological Department in Himachal Pradesh's Shimla said thunderstorms and rain along with light hailstorms are expected in parts of the state from Monday to Wednesday.

Rain and snowfall are likely in higher altitude areas of the state, it said.

Due to fresh western disturbance in mid-troposphere levels with its axis at 5.8 km above the mean sea level, a light to moderate thunderstorm or rainfall is expected, it said.

The mercury dropped by two to five degrees in most parts of Rajasthan, according to the weather department.

Dholpur was the hottest place in the state with a maximum temperature of 46.1 degrees Celsius.

The MeT office has predicted dust storms in Jhunjhunu, Alwar, Bharatpur, Dholpur, Sri Ganganagar, Hanumangarh and Churu districts during the next 24 hours.

The dry spell in western Odisha ended with moderate to heavy overnight rains.

It said rainfall accompanied by thunderstorms and dusty winds is likely in Odisha over the next three-four days due to strong southwesterly winds from the Bay of Bengal towards northeast and eastern India.

Madhya Pradesh is also likely to receive respite from heatwave conditions, with the MeT department forecasting a drop in mercury over the next few days.

The temperature is likely to fall by two to four degrees Celsius in the next three days, PK Saha, senior meteorologist with the IMD's Bhopal office, told PTI.

The monsoon is likely to arrive in Madhya Pradesh by mid-June, he said.