MPs voice concern over law and order situation in NCR

Cutting across party lines, members of Parliament on Wednesday voiced concern over the law and order situation in the capital and adjoining areas, with Community Party of India-Marxist leader Brinda Karat, alleging that the National Capital Region was turning into a 'crime haven'.

"The NCR has become a haven for crime. A 22-year-old girl student was shot dead in broad day light in the capital on Tuesday. Today a couple was shot at close to the capital. It seems the entire region is becoming a haven for crime," Karat told reporters outside Parliament.

A day after the girl was shot dead by an unidentified assailant near her college in South Delhi, a couple on a motorcycle was shot at in the NCR. Meena and her husband Munnawar Hussain were admitted to Noida's Kailash Hospital after the assailants fired at them near Noida. Seeking the home ministry's intervention, Karat said, "The conviction rate is going down and crime rate is going up. So the message is that whatever you do, there would be no punishment."

Targetting the police, Congress MP Sandeep Dikshit said, "It seems that the Delhi Police is not keen on basic policing. They immediately reach a construction site but do not show the same promptness in reaching a crime site."

Bharatiya Janata Party leader Rajnath Singh said, "Even Delhi Chief Minister Sheila Dikshit has said that women are not safe in Delhi. The Centre should take some concrete steps to improve the situation." Terming the law and order situation in the capital as 'alarming', Rashtriya Janata Dal leader Lalu Prasad Yadav said, "There is no law and order in Delhi. Even the CM has also said that the police has failed in preventing crime. So the situation is alarming."

Singh added that the Noida shooting was not an isolated incident, and attacked the Uttar Pradesh government over the law and order situation in the state. "Lawlessness is prevailing in the entire state. There are many areas where such incidents are becoming regular. The centre should look into it." 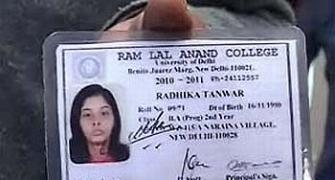 Couple shot at in Noida over property row