T'is the holiday season at the White House. United States First Lady Melania Trump has unveiled the White House Christmas decor on the theme, 'America the Beautiful', which she said is a "tribute to the majesty of our great nation".

All of the halls, from the East Room to the Red Room, were decked by over 125 volunteers.

"I am excited to announce this year's White House holiday theme, 'America the Beautiful'," the US First Lady said on Monday. It is "a tribute to the majesty of our great Nation", she said.

"From coast to coast, the bond that all Americans share is an appreciation for our traditions, values and history, which were the inspiration behind the decorations this year," Melania Trump said.

Upon entering the East Wing, visitors are welcomed by The Gold Star Family Tree, an annual tradition among the holiday decorations. Draped in blue, the colour of perseverance and justice, it pays tribute to American heroes and their families who walk beside them in service. This year, families who decorated the tree placed the name of their fallen family member on ribbon that will adorn the tree, the White House said in a statement. Around the corner, the East Colonnade celebrates the diverse landscapes found across US.

Separated by region, classical urns hold foliage representative of the official tree of each state and territory. Just beyond the gallery of greenery, the East Garden Room displays holiday cards sent by first families over the past twelve administrations. This year's card, shimmering in gold, shows the unique landscape of America.

Entering the ground floor corridor is the Vermeil Room, a collection made up of more than 1,600 pieces, many of which are on display. There is a Kennedy-themed tree in the Vermeil Room, with ornaments featuring an iconic portrait of President John F Kennedy and sailboats. The tree sits beside the portrait of former first lady Jacqueline Kennedy.

To preserve the White House for the American people, Jacqueline Kennedy established the 'People's House' as a living museum and laid the foundation for expanding the diversity of the collection. "Sharing in this love for arts and culture," President Kennedy's portrait is featured on the graceful trees, the statement said. IMAGE: A painting of George Washington hangs beside Christmas trees in the East Room of the White House during a holiday decoration preview in Washington. Photograph: Kevin Lamarque/Reuters

The next stop, the White House Library, is home to a collection of more than 2,700 classic works that provide first-hand accounts of progress in US history.

In recognition of this year's 100th anniversary of the ratification of the 19th Amendment, the library shines a spotlight on women who were pioneers for gender equality in the US. The decor highlights women at the forefront of American achievements who have paved the way for generations to come. IMAGE: The Red Room of the White House is adorned with holiday decorations in Washington. Photograph: Kevin Lamarque/Reuters

Nearby is the China Room, which houses the historic collection of presidential china patterns and is modelled to show the joy that home can bring to us all. The home scene is set for timeless traditions and tasty treats, capturing the importance of time spent together during the holiday season. Stockings for the First Family hang on the fireplace, one of the 28 historic fireplaces throughout the White House.

Upstairs in the East Room, visitors will see planes, trains and automobiles race around the trees, through the ribbons, and between the twinkling lights. 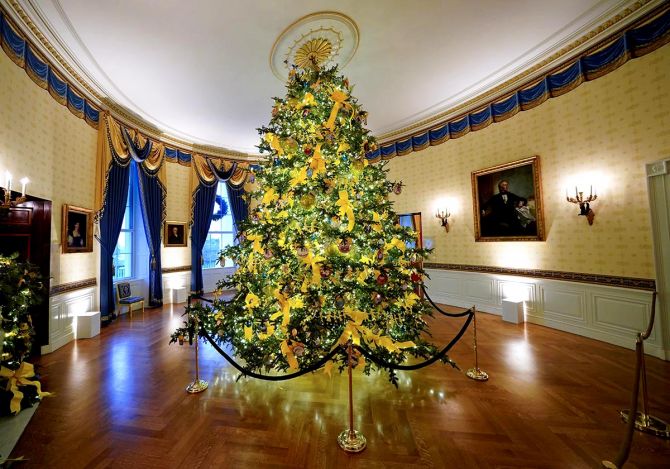 IMAGE: The Blue Room of the White House is adorned with holiday decorations. Photograph: Kevin Lamarque/Reuters

"From the First Transcontinental Railroad to the Apollo 11 lunar landing, the East Room celebrates our monumental triumphs in innovation and technology," the White House said.

Moving into the parlours, the Green Room features the beauty of American wildlife. Vignettes in the windows showcase the diversity of creatures that flutter and find refuge among the US landscape.

As one moves into the Blue Room, the official White House Christmas tree illuminates the room and stands over 18 feet in height. 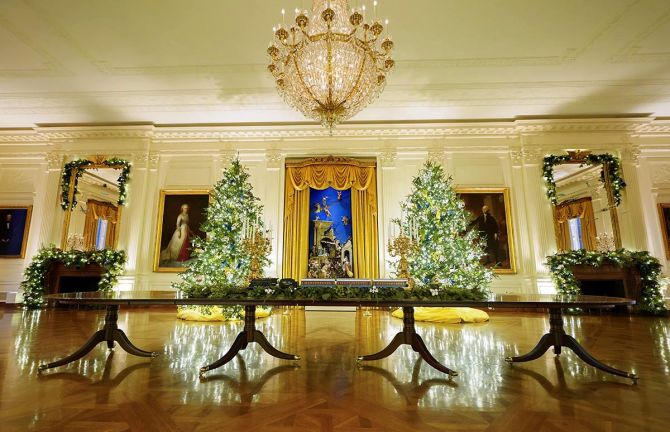 IMAGE: The East Room focuses on transportation -- From the First Transcontinental Railroad to the Apollo 11 lunar landing, the East Room celebrates our monumental triumphs in innovation and technology. Photograph: Kevin Lamarque/Reuters

"This majestic Fraser fir showcases the splendour of our country through the unique perspective of America's children," the White House said.

Students across the country were asked to artistically depict what makes their state beautiful by highlighting the people, places and things that capture the spirit of the state in which they call home. Glistening on the branches, their mini masterpieces collectively showcase 'America, the beautiful'. "The gleaming tree, bedecked with rays of yellow and gold, unites us in our common goal of building a brighter future for America's children, aligning closely with First Lady Melania Trump's 'BE BEST' initiative, which focuses on giving all children the best opportunity to succeed in life," the White House said. "As one moves to the Red Room, we salute America's everyday heroes who serve as first responders and frontline workers. Handmade ornaments highlight the many professionals and volunteers who serve their communities with a spirit of generosity," it said.

"As one moves to the State Dining room, we continue to celebrate 'America the Beautiful," it said. This year's Gingerbread House, a delicious masterpiece displayed on the iconic eagle pier table, replicates the West Wing, Executive Residence, East Wing, and for the first time, the Rose Garden and the First Ladies' Garden.

"Ending in the Grand Foyer and Cross Hall, guests find themselves overflowed with love, joy, peace, hope, and faith, to reveal the most important gifts of the season," the White House said.