Meenakshi Lekhi: From BJP face in media to Union minister

A popular face of the Bharatiya Janata Party and a good orator, Meenakshi Lekhi has for long articulated and advocated the party's policies and programmes while taking on her political opponents before she found a place in the Union Council of Ministers. 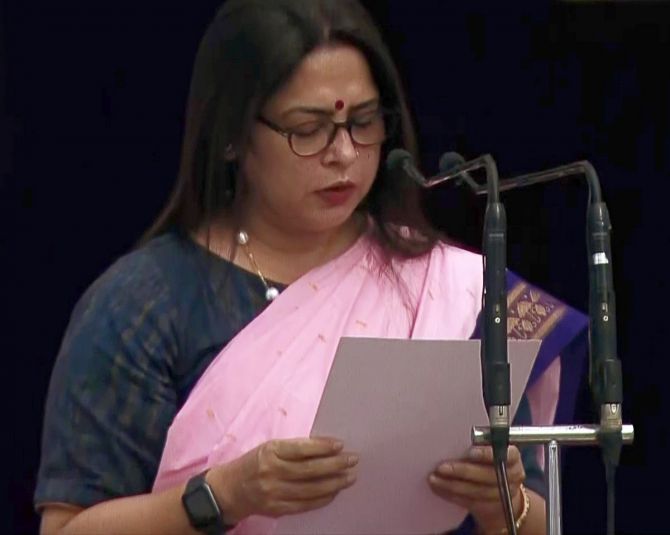 Fifty-four-year-old Lekhi, who took oath as a Union Minister of State on Wednesday on her second term as the MP from the prestigious New Delhi constituency, has been at the forefront of struggles on a host of issues ranging from those pertaining to women and environment to law and development.

A law graduate of Delhi University, she has taken up various important issues such as permanent commission for women officers in the armed forces as a lawyer.

It was her contempt petition that forced Congress leader Rahul Gandhi to tender an apology in 2019, for attributing his 'Chowkidar Chor Hai' jibe against the prime minister to the Supreme Court.

She was appointed vice president of the BJP's Mahila Morcha in 2010. Later, as a national spokesperson of the party, she articulated and advocated the party's policies and programmes in the media while taking on her political opponents.

As a parliamentarian, Lekhi was part of drafting committees of important Bills, including the Women Reservation Bill and the Sexual Harassment of Women at Workplace (Prevention, Prohibition and Redressal) Bill.

She has also served on different parliamentary panels, including the Standing Committee on external affairs, committee of privileges, and General Purposes Committee.

She has served as chairperson of the Committee on Public Undertakings and the Joint Committee on the Personal Data Protection Bill, 2019.

Her wide ranging interests involve her in social work as well as literary and cultural activities.