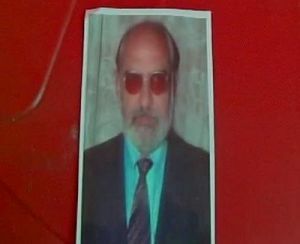 The dean of a Jabalpur medical college, said to be probing fake examinees in the Vyapam scam, was found dead in a Delhi hotel today, adding yet another murky twist to the scandal.

The death of Dr Arun Sharma, Dean of Netaji Subhas Chandra Bose Medical College in Jabalpur, Madhya Pradesh, came to light a day after an investigative journalist with a leading Delhi-based news channel died under mysterious circumstances soon after he had interviewed parents of a girl found dead after her name figured in the massive admission and recruitment scandal.

Police said Sharma's body was found at a hotel in south-west Delhi's Dwarka by the staff who opened the room using a duplicate key after he did not answer repeated knocks on the door.

An almost empty bottle of alcohol and vomit was found in the room.

Forensic evidence has been collected and his body sent for post mortem.

Asked about reported links of Sharma with Vyapam scam, Joint Commissioner of Police (South West) Dipender Pathak said police is "covering all the angles" in its investigation.

Incidentally, Sharma was the second Dean of the medical college to have died under mysterious circumstances in the last one year. D K Sakalle, who was inquiring into admissions of candidates for whom proxies had allegedly appeared in the pre-medical test, had been found burnt at his residence.

"Dr Sharma was found dead at his room in a hotel in Delhi. We are shocked at the death, He was a very close to Dr Sakalle," Indian Medical Association Jabalpur district president Sudhir Tiwari told PTI.

Tiwari claimed Sharma had wept at the funeral pyre of Sakalle, claiming the latter had not committed suicide, as concluded by police after investigation.

"I suspect that Sharma too might have been killed," Tiwari said in Jabalpur, and said he had learnt two days back that the dean had submitted a report relating to the Vyapam scam to the Special Task Force probing it.

An investigative journalist with a TV channel Akshay Singh had died in Madhya Pradesh's Jhabua district on Saturday soon after having interviewed the parents of the deceased girl Namrata Damor, whose body had been found under near railway tracks in Ujjain district on January 7, 2012.

Minutes after the interview, Akshay Singh, 38, started frothing at the mouth. He was rushed to civil hospital and later to a private hospital, but doctors failed to revive him. From there he was taken to another hospital in nearby Dahod in Gujarat, where he was declared brought dead.

Meanwhile, MP Chief Minister Shivraj Singh Chouhan has said the government will write to the high court-appointed SIT probing the Vyapam scam to "thoroughly investigate" the death of Singh, a journalist with the TV today group.

Addressing a press conference in Bhopal, Chouhan said his government will have no objection if the high court ordered a probe into the scam by any other agency, including CBI, as being demanded by Congress.

He said the final report of the post mortem examination, which was videographed, was awaited.

"Every death is unfortunate and sad. We feel all the deaths (in the scam) should be probed...The state government had earlier written to the high court for probing the deaths," he said, adding that he will be writing again.

In another tweet, he said "Incidentally Dr Sakalle earlier Dean of Medical College Jabalpur was found dead burnt in his residence lawns at 730 am 2 yr back."

Singh further said, "He (Sakalle) was taking strong action against irregular admissions in Medical Colleges through Vyapam. No Govt said it was suicide."

Around a fortnight back, the SIT had submitted a report to the high court wherein it said 23 accused and witnesses in the Vyapam scam had died "unnatural" deaths. Since then two more accused died under mysterious circumstances. Some reports put the figure at over 40.

The death of Akshay Singh and now Sharma's has muddied the water even further.