US medical bills turned into paintings and sold to erase debt

An art collective in the United States has come up with a novel way of paying off three people's medical debt: turning their hospital bills into huge paintings and selling them to collectors for thousands of dollars.

MSCHF, a Brooklyn-based group of artists and designers, painstakingly recreated three peoples’ medical invoices as large scale paintings, down to every line item, such as $4940.25 (Rs 3.6 lakh) for a CT scan and $116 (Rs 8,468) for urinalysis. The work is aptly called 3 Medical Bills.

Each artwork was then sold at a price equal to the amount of each individual’s debt. The profits went back to the medical bill owners in full.

The artists aim to make a wider commentary about the US health care system. Over 137 million people in the United States reported medical financial hardship, a 2019 study found. 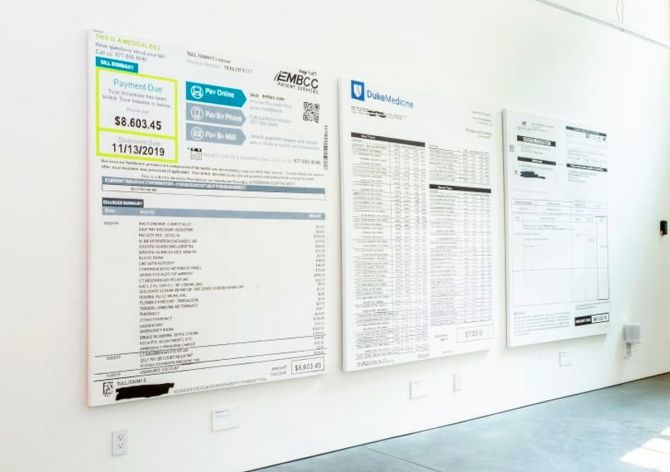 "We think that the American health care system has reached such a point of runaway absurdity that an off-the-wall solution is the only fitting tactic to address it," the group's head of strategy and growth, Daniel Greenberg was quoted as saying to CNN, adding that the project is "a conceptual artwork, not a reliable strategy for debt alleviation."

The grop said that earlier this year, they placed an ad in its eponymous magazine seeking Americans with excessive medical debt. After prioritising respondents with debt resulting from accident and illness, the group picked three bills at random.

The large oil-on-canvas replicas of their medical bills were then sold to a New York gallery for a combined total of $73,360.36 (Rs 53 lakh).