Turning down a request made by Madhya Pradesh Chief Minister Shivraj Singh Chouhan to Marumalarchi Dravida Munnetra Kazhagam general secretary Vaiko -- to call off his party's protest against Sri Lankan President Mahinda Rajapakse -- party workers on Monday left for Sanchi to demonstrate against the violation of rights of Tamils in the island nation.

"We have turned down the request of the Madhya Pradesh chief minister and urged him to allow us to protest peacefully in a democratic manner against Rajapakse's visit. Nearly 1,000 people in 41 buses have left Chennai's Marina Beach, after paying their respect to Anna Durai, for Sanchi to stage a peaceful demonstration. Vaiko is leading the convoy of 41 buses and we will reach Sanchi by September 20-21," said MDMK sources.

The MDMK general secretary had written a letter to Chouhan requesting him to cancel Rajapakse's visit to lay the foundation stone of the International Buddhist University at
Sanchi, as people in Tamil Nadu hold him responsible for the killing of a large number of Tamils in the island nation.

Chouhan had earlier written to Vaiko, requesting him to give up the protest, claiming that the programme at Sanchi is totally apolitical in nature, as it was aimed at bringing together civilisations of several Asian countries.

Chouhan also said that his government has extended an invitation to the heads of nearly 15 Asian countries, including the prime minister of Bhutan, who will be at Sanchi to take part in the programme. 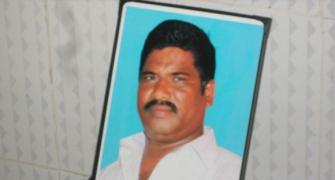