Union Home Minister Amit Shah's open challenge to the opposition for a debate on the Citizenship Amendment Act (CAA) was on Wednesday accepted by Bahujan Samaj Party supremo Mayawati while Samajwadi Party chief Akhilesh Yadav threw a counter challenge for a debate on development. 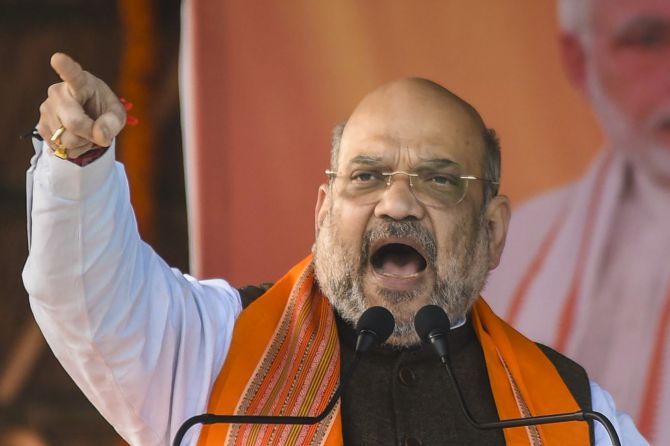 Accusing the Opposition of 'misleading' people on the amended citizenship law, Shah on Tuesday threw the challenge for the debate to Rahul Gandhi (Congress), Mamata Banerjee (Trinamool Congress), Akhilesh Yadav and Mayawati.

'The BSP is ready to accept the challenge thrown by the central government, which is troubled by the organised struggle and agitation all over the country against the most controversial CAA/NRC/NPR, especially by the youth and women, for a debate on the issue on any platform and anywhere,' Mayawati said in a tweet in Hindi.

Asked by reporters in Lucknow about Shah's challenge, Akhilesh Yadav said, "I challenge the BJP for a debate on development."

"I ask them to fix a place or a forum, with their favourite channels and anchors, for a debate on development. We Samajwadis are ready for it. Why did they not want to debate on the state of the economy and demonetisation," the former Uttar Pradesh chief minister said.

Yadav said those who 'understand the soul' of the country are opposed to the contentious law and accused the BJP of discrimination on the basis of religion.

Speaking at a rally in Karimnagar district in Telangana, Owaisi wanted Shah to discuss the new law with him instead of others.

"I am here.. debate with me.. why (debate) with these people.. 'daadhi wale se karo na' (debate with a bearded man). We will talk and debate on CAA, NPR and NRC," the leader of AIMIM said.

Senior Congress leader Kapil Sibal has already challenged Shah for a debate while party colleague P Chidambaram asked Prime Minister Narendra Modi as to why he or his government did not accept his suggestion of the PM holding an open debate with five critics of the amended Citizenship Act and let people draw their own conclusion.

'I had suggested that the PM should select five of the most articulate critics and hold a Q&A session with them. Why doesn't the PM/Government accept the suggestion?

'Let five critics of CAA-NPR debate the PM. Let the event be televised live. And let the people draw their own conclusions,' he said on Twitter.

In another tweet, he said, 'HM (home minister) has dared the Opposition to debate CAA. Is that not what the Opposition, jurists, academics, writers, artists, students and youth have been doing since Dec 12?'

Shah challenging those who haven't come out of their homes to fight against him on CAA: Priyanka

Congress general secretary Priyanka Gandhi Vadra on Wednesday said Home Minister Shah is challenging those leaders on the citizenship law who have not come out of their homes to fight against him but are instead talking about problems of other states.

In a tweet, she also mentioned the opening line of a hit song from the 1960s film Dil Apna Aur Preet Parai -- 'Ajeeb Dastan Hai Yeh, Kahan Shuru Kahan Khatam' ...(This is a strange story with confusion over its beginning and the end)'.

She wrote in the tweet in Hindi, 'The home minister is challenging those who have not even come out of their homes to fight against him, and the people whom he should throw a challenge are talking about problems of other states.'

She went on to add, 'The people of Uttar Pradesh understand everything.'