Maya warns UP: Watch out for 'communal design' of BJP, RSS

Bahujan Samaj Party supremo Mayawati has warned the people against the "communal designs" of the Rashtriya Swayamsevak Sangh and the Bharatiya Janata Party and urged them not to lose their cool in the run-up to the 2017 Assembly polls in Uttar Pradesh. 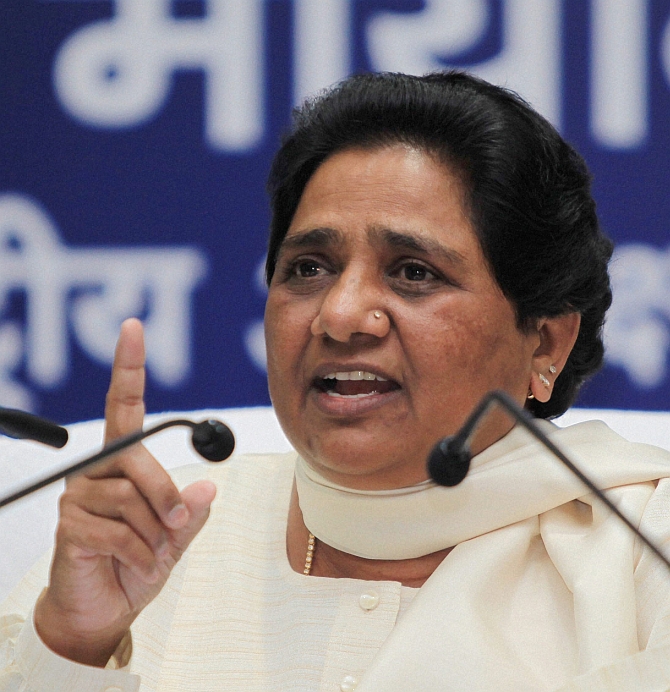 She accused the Modi government of raising issues of cow slaughter and 'love jihad' to keep the minorities "under fear" as well as of being "anti-Dalit".

Describing the NDA government at the Centre as "pro-capitalist", Mayawati alleged that Prime Minister Narendra Modi had forgotten all of his promises made to the people before the 2014 general election.

"The black money from abroad has not been brought back nor have cheques of Rs 15 lakh per person been issued as promised," she told a rally at the Kothi Meena Bazar ground in Agra on Sunday.

Referring to a recent statement of RSS chief Mohan Bhagwat, the BSP supremo said, "The RSS chief wants Hindus to produce more than two children. They cannot even provide for two children. Who will look after them?"

"They (BJP) came to power on the basis of lies and false promises but their performance has been dismal," she alleged.
Mayawati also attacked the ruling Samajwadi Party (SP) in Uttar Pradesh alleging that it was "run by goondas".

Accusing the BJP of putting up a "facade" in the name of development, Mayawati said had the party been serious about its intentions, it would have worked towards achieving that goal when it was in power in Uttar Pradesh.

Reminding the people of Prime Minister Narendra Modi's promises of free water and electricity, foodgrains at an affordable price for the poor and better remuneration for labourers, the BSP supremo claimed that the BJP had failed to deliver on every front.

Stating that the party had promised to double the income of farmers after coming to power, she said, "More than two years have passed. What has been done for the farmers? The BJP had plans to amend the land acquisition laws in such a manner, which would favour big industrialists and the rich."

Claiming that small traders were starving due to the "wrong policies" of the BJP, Mayawati alleged that under the party's rule, the nationalised banks have written off debts of big industrialists to the tune of almost Rs 1.14 lakh crore.

She also took a dig at the BJP by referring to the Vyapam scam and controversies surrounding industrialists Lalit Modi and Vijay Mallya.

Training her guns on the Congress, the BSP supremo said the party had ruled Uttar Pradesh for almost 32 years since Independence and now, it was out of power both in the state and at the Centre for its "wrong policies".

Alleging that the party was "eyeing upper caste votes" in the 2017 assembly election in Uttar Pradesh, she said, "In a last ditch effort, the Congress is now mooting a 10 per cent reservation for the poor among the upper castes whereas, the BSP has been batting for the same for not only the upper castes, but also Muslims and other backward sections of the society for long."

Mounting an attack on the chief ministerial candidate of the Congress, Sheila Dikshit, Mayawati said, "They are projecting an elderly woman from the Brahmin community as the party's face for the UP polls. The same woman, when she was the chief minister, had blamed the people from Bihar and Uttar Pradesh for making Delhi unclean."