The support for the eight-year-old girl was growing with politicians, cutting across party lines, Bollywood stars seeking justice for her. 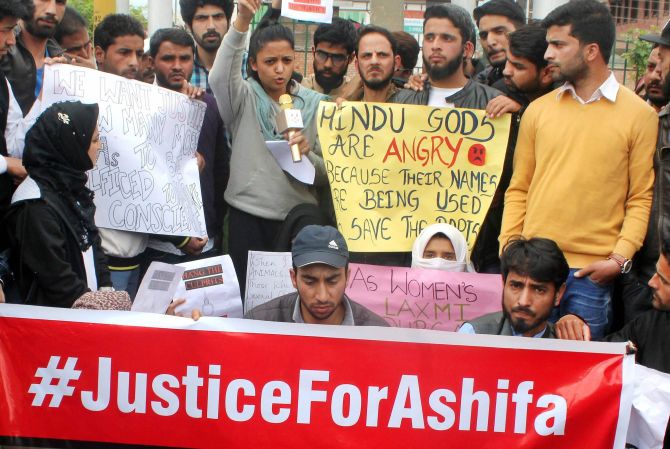 IMAGE: Former JNU vice-president Shehla Rashid along with local students during a protest demanding justice for 8-year-old girl, who was raped and murdered. Photograph: PTI Photo

From Union minister V K Singh to Congress president Rahul Gandhi, politicians across the divide joined hands with showbiz celebrities and others to speak up for the eight-year-old girl from the minority Bakerwal community who was gangraped and killed in Kathua three months ago.

An enraged nation demanded "exemplary punishment" for the culprits of the crime, even as the politics over the arrest of eight people in connection with the case continued to dominate the discourse in this city of temples.

The support for the eight-year-old girl was growing with politicians, cutting across party lines, seeking justice for her.

Minister of State for External Affairs V K Singh said, "we as humans" had failed the eight-year-old girl, but she would not be denied justice.

Congress president Gandhi described the rape and killing of the girl as "unimaginable brutality" that cannot go unpunished, and wondered how anybody can seek to protect the culprits. He also lashed out at the politics being played over the crime.

Jammu and Kashmir Chief Minister Mehbooba Mufti said her government would not allow law to be obstructed and ensure justice in the rape-and-murder case.

In a tweet, she said, "The law will not be obstructed by the irresponsible actions and statements of a group of people. Proper procedures are being followed, investigations are on the fast track and justice will be delivered".

Naeem Akthar, a senior minister in the Jammu and Kashmir government, regretted that lawyers, who are the custodians of law, have been fighting on streets and not in the court rooms.

"Government has done whatever is possible and investigations have been concluded. Now it is for the courts to deliver the justice and I am hopeful that the courts would be able to do so," he said.

He said the Bar Council of Jammu has an important role to play in the case.

Jammu and Kashmir police chief S P Vaid, speaking on the case during a live broadcast on Twitter, asserted that his force was as competent as the CBI to probe the Kathua rape and murder case.

"If we can fight terrorism and stone pelting, why we can't carry out the professional investigation. Our officers are on deputation with the CBI," the Director General of Jammu and Kashmir Police said.

Vaid termed as "misconception" that only officers from Kashmir were part of the special investigation team which carried out the probe into the heinous crime.

"The SIT had officers from all ranks and all regions. A police officer is a police officer and not a Muslim, Hindu, Sikh or Christian. That is what we believe in," he said, citing the example of SSP Jammu Ramesh Jhalla and Deputy SP S Sharma, who were actively involved in the case.

Many celebrities also voiced their outrage over the crime, seeking punishment for those guilty in the case.

Several Bollywood celebrities, including Farhan Akhtar, Sonam Kapoor, Javed Akhtar, Shirish Kunder, asked the public to demand justice for the minor in the wake of the shameful incident.

"Imagine what goes through the mind of an 8-year-old as she is drugged, held captive, gang raped over days and then murdered. If you don't feel her terror, you are not human," Faran Akthar tweeted.

Actor Sonam Kapoor, in a tweet, said, "Ashamed, appalled and disgusted by fake nationals and fake Hindus. I cannot believe this is happening in my country."

Meanwhile, Deepika Rajawat, who claimed to be the lawyer representing the family of the victim, appeared on television channels alleging that she had been threatened by Jammu Bar Association president B S Slathia from appearing in the case.

She went on to state that she had filed a complaint with the Jammu and Kashmir High Court as well as the Supreme Court, after which the state High Court directed the security wing to ensure her safety in the court premises.

Bar Council denied the claims made by Rajawat and said since the lawyers are on strike since April 3, she was requested not to appear in any of the cases.

Another lawyers' body, Indian Association of People's Lawyers, in a statement condemned the action of the Jammu Bar Council.

Under pressure from all quarters, Jammu Bar Association president B S Slathia today held a press conference in which he called for justice for the eight-year-old rape victim.

He alleged that the association's agitation for a CBI probe into the case to ensure justice for the victim was being portrayed as communal by those with a "Kashmir-centric mindset".

The minor, who belonged to the nomadic Bakerwal Muslim community, had disappeared from a spot near her house close to Rasana village in Kathua in Jammu and Kashmir on January 10. A week later, her body was found in the same area.

A Special Investigation Team, formed to probe the incident, has arrested eight people, including two special police officers and a head constable, who was charged with destroying evidence.

Jammu has been on tenterhooks since the brutal rape and murder. The city's bar association has opposed the action against the accused and alleged that minority Dogras were being targeted.