A lone gunman armed with an assault rifle shot and killed 50 people and injured 53 others at a gay nightclub in Orlando, Florida on Sunday, in the deadliest mass shooting in the US which was also described as the "worst terror attack" in American history since 9/11. 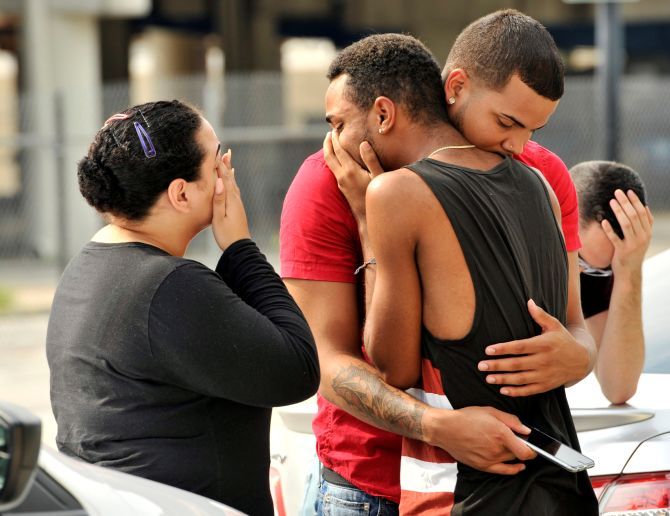 IMAGE: Friends and family members embrace outside the Orlando Police Headquarters during the investigation of a shooting at the Pulse night club,in Orlando, Florida. Photograph: Steve Nesius/Reuters

A state of emergency has been declared in Orlando and statewide after the shooting.

50 people were killed inside the Pulse nightclub and at least 53 people were injured, police say.

"It appears he was organised and well-prepared," Orlando Police Chief John Mina said. The shooter had an assault-type weapon, a handgun and "some type of (other) device on him."

There has been no claim of responsibility for the attack on jihadi forums, but Islamic State sympathisers have reacted by praising the attack on pro-Islamic State forums. CNN said it was the "worst terror attack" in US history since the September 11, 2001 attacks that killed nearly 3,000 people. 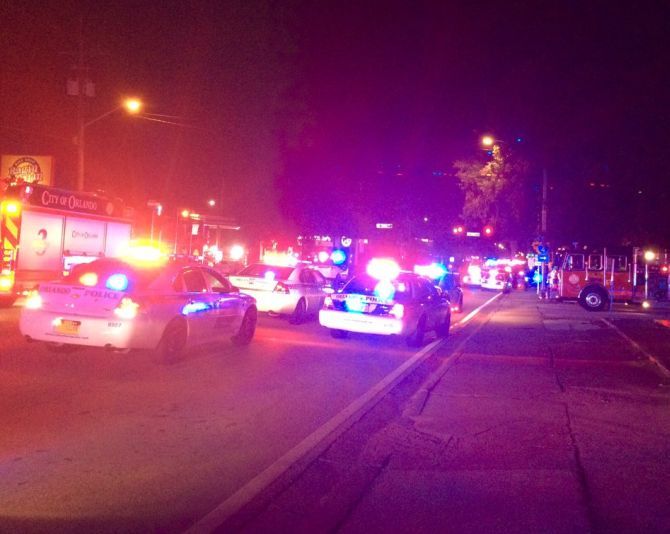 Orlando authorities said they consider the violence an act of domestic terror and the FBI is involved in the probe.

While investigators are exploring all angles, they "have suggestions the individual has leanings towards (Islamic terrorism), but right now we can't say definitely," said Ron Hopper, assistant special agent in charge of the FBI's Orlando bureau.

Officials, aided by the FBI, warned that a lengthy investigation was ahead given the number of victims and the scope of the violence.

At least one Senator has also described it as an act of terrorism. President Barack Obama, who was briefed this morning by Lisa Monaco, his Assistant for Homeland Security and Counterterrorism, is personally monitoring the situation. The shooting is being investigated by the FBI. 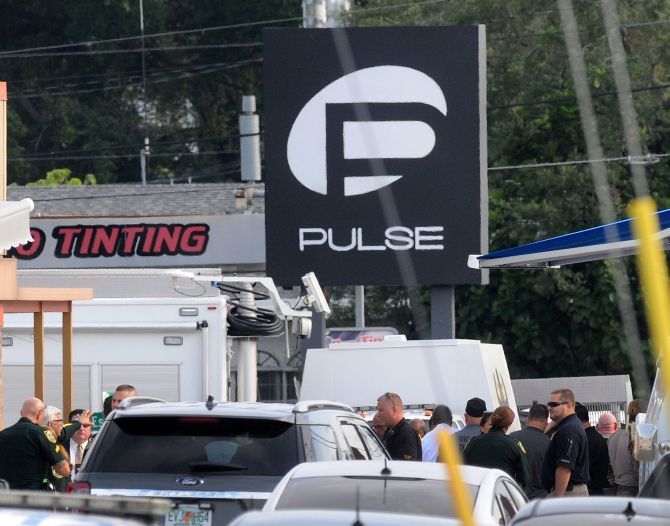 "Our thoughts and prayers are with the families and loved ones of the victims," White House Press Secretary Josh Earnest said. The shooting started a couple of minutes after 2 am. The alleged shooter identified as Omar Siddique Mateen was killed. CNN reported he had pledged allegiance to IS at some point.

"The President asked to receive regular updates as the FBI, and other federal officials, work with the Orlando Police to gather more information, and directed that the federal government provide any assistance necessary to pursue the investigation and support the community," Earnest said.

The deadly incident started over a three hour period, beginning at around 2 am (0600 GMT) when shots were fired amid the loud music at the Pulse Orlando gay nightclub.

Police said the shots were fired by a gunman armed with an assault rifle and a handgun. 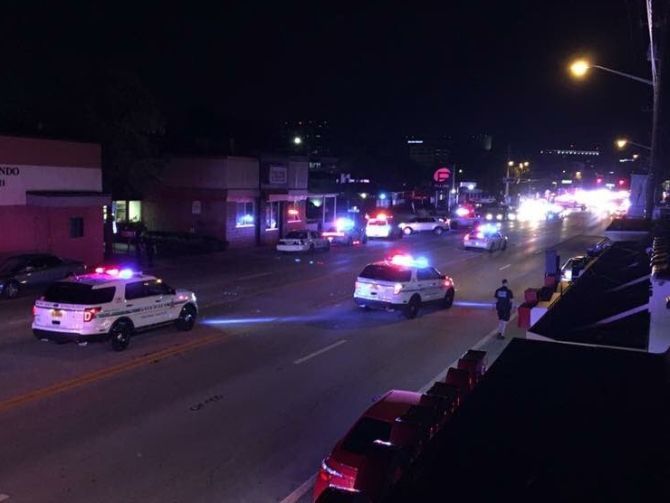 IMAGE: The police the gunman who killed nearly 50 people and injured several others. The attackers motives are still unclear. Photograph: Orlando Police/Twitter

"The suspect at some point went back inside the club where more shots were fired. This did turn into a hostage situation," Mina told reporters adding "At approximately 0500 hours (0900 GMT) this morning, the decision was made to rescue hostages that were in there".

Vice President Joe Biden also offered his prayers for all those killed and injured in the shooting and sends his condolences to all the families of the victims.

"Horrific incident in FL. Praying for all the victims & their families. When will this stop? When will we get tough, smart & vigilant?" he said in another tweet. 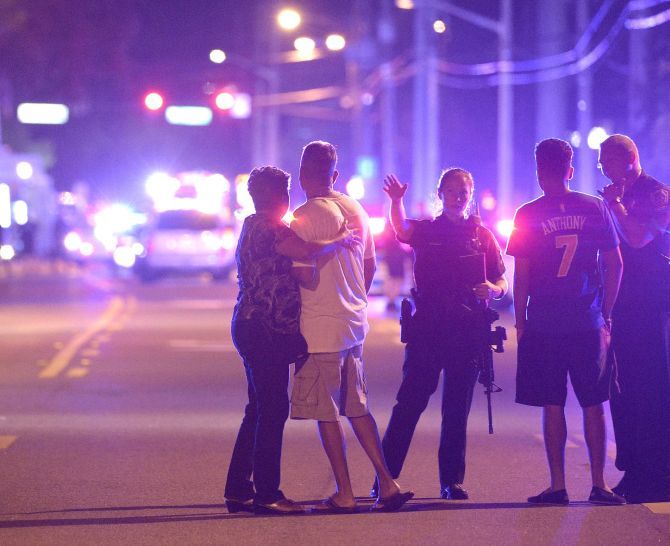 "Woke up to hear the devastating news from FL. As we wait for more information, my thoughts are with those affected by this horrific act," tweeted Hillary Clinton, the Democratic presidential candidate.

Devastated by this "heartbreaking act of terrorism in Orlando," Florida Senator Marco Rubio said adding that confronting the threat of violent homegrown radicalisation is one of the greatest counterterrorism challenges the US law enforcement and intelligence community faces. 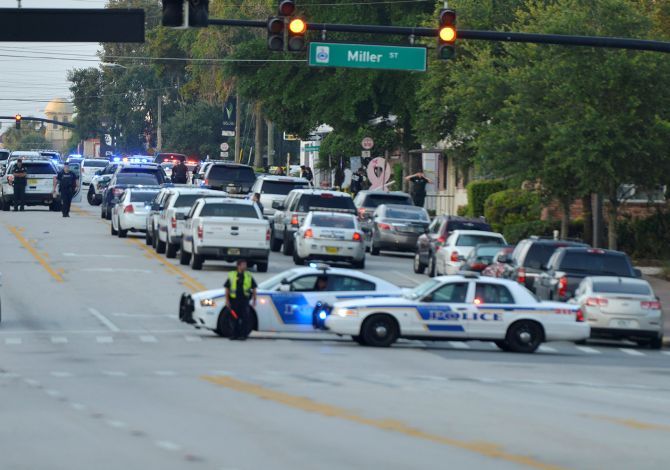 "We must do more at every level of government and within our own communities to identify and mitigate this cancer on our free society and prevent further loss of innocent life," he said.

"This horrific attack reminds us that we must remain vigilant here at home against threats of terrorism. It is critical that federal, state and local law enforcement officials work together to get to the bottom of this attack," said Senator Tom Carper, top Democrat on the House Homeland Security Committee.

The president is scheduled to address the nation soon, the White House said.