#MarchForIndia: Nobody has the right to call our country intolerant, says Anupam Kher 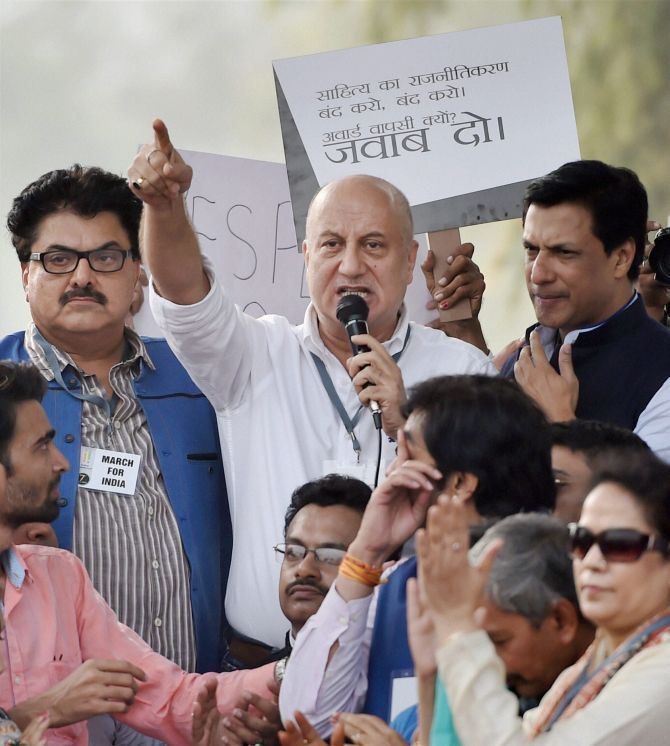 Seeking to counter protests over growing intolerance, Bollywood actor Anupam Kher on Saturday led a delegation of writers and artistes to the President and the prime minister, saying that 'award-wapsi' campaign was part of a "political agenda" and a "conspiracy" to defame the country.

Kher, director Madhur Bhandarkar and painter Vasudev Kamath were among the members who marched to Rashtrapati Bhavan and handed over a memorandum to President Pranab Mukherjee.

The memorandum, signed by 90 personalities, including Kamal Haasan, Shekhar Kapur, Vidya Balan, Raveena Tandon and Vivek Oberoi besides, authors, former judges and musicians, alleged that those returning the awards were wrongly projecting the country as intolerant.

"Any brutal killing is condemnable. We strongly condemn it and expect swift justice. But, if some people use this and conspire to defame the country at international level, then we must think about it," Kher said while reading out their letter to the President.

"The prime minister stated that Indian culture goes beyond tolerance, and talks of acceptance," a PMO statement said after the meeting. 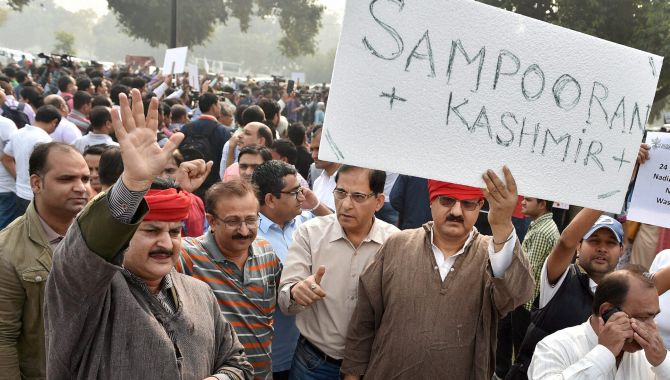 Kher had described the protests as one with a "political agenda".

"Those people who returned their awards did not initiate any dialogue with the PM. They should have met PM first before returning their awards. Modiji said these protests tarnish the image of India outside and affect its unity," Kher told PTI.

Kher said no one has the right to call India intolerant and there is no country in the world, which is more tolerant than India.

"People want me to become defensive as they keep telling me, 'You belong to Bharatiya Janata Party, your wife is from BJP.' Their motive is to defame the country. If there is a fight in the house, we have a dialogue but these people are upset without any reason and are not even having any dialogue. I got angry because foreign papers were calling India intolerant," he said.

Bhandarkar, who joined the march, said, "The whole projection and narrative that is going abroad is wrong. It is a diverse country and of course there are incidents but we all condemn them. There is no two ways about it." 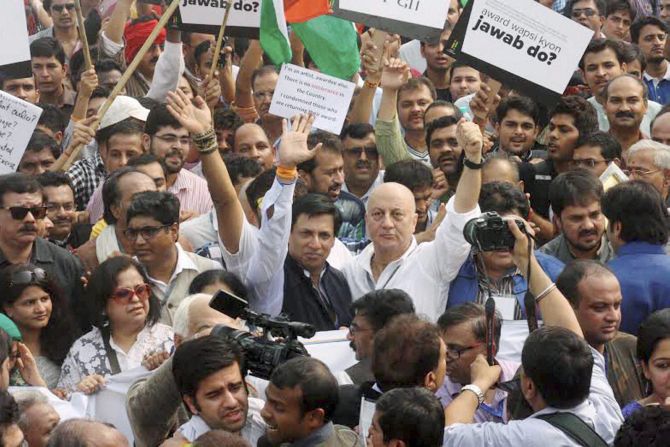 Bollywood actor Anupam Kher, Madhur Bhandarkar and other film personalities during their March for India programme over intolerance issue, from National Museum to Rashtrapati Bhavan in New Delhi on Saturday. Photograph: PTI

"After years of tolerance, we have got a man (Narendra Modi) with a view. They don't want him to work. They want to sabotage what he is doing. There is a huge political agenda behind the act of returning awards," he said.

In Chennai, Kamal Haasan reiterated his stand against returning the awards, saying such action will not lead to a solution. 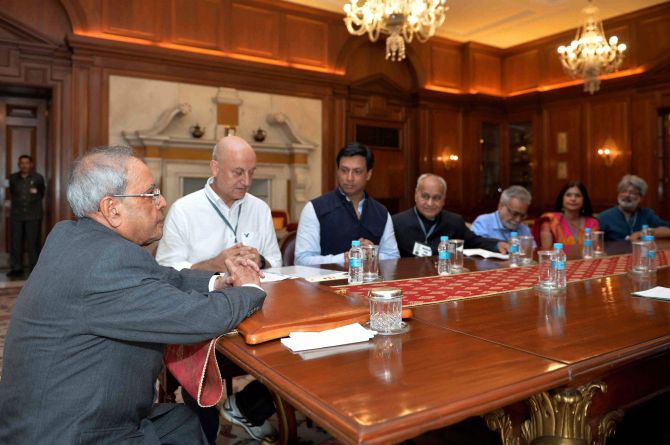 At least 75 members of the intelligentsia have returned national or literary awards in an escalation of protests by writers, historians, filmmakers and scientists over "growing intolerance", voicing fears that the country's robust democracy might be "coming apart" in the current atmosphere.

The BJP-led government has dismissed the protest as "manufactured rebellion" and "politically" motivated.