Many Cong leaders detained during gherao of Raj Bhavans across states

Congress leaders and workers continued their protests in several states on Thursday against Rahul Gandhi's questioning by the Enforcement Directorate in the National Herald money-laundering case with many of them taken into preventive custody including former Union minister Renuka Chowdhury in Hyderabad after she allegedly grabbed the collar of a police official. 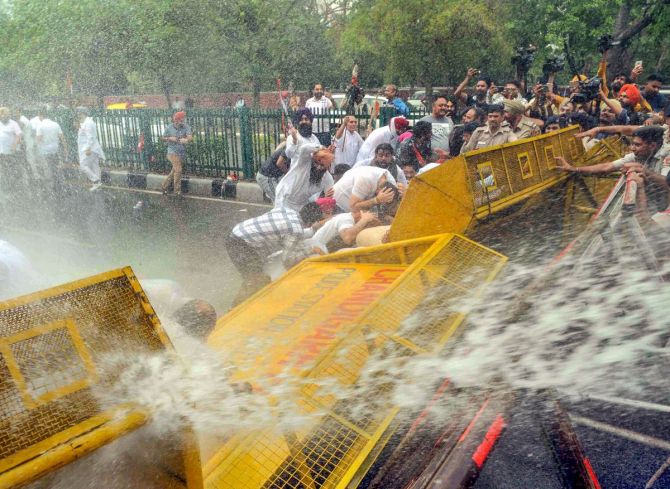 IMAGE: Security personnel use water cannons and barricades to stop Punjab Congress workers during their protest march over EDs probe against Rahul Gandhi in the National Herald case, in Chandigarh, on Thursday, June 16, 2022. Photograph: PTI Photo

The Congress during the day staged a gherao of all Raj Bhavans across the country.

Gandhi has been questioned by the ED for three consecutive days in the case, with the agency seeking answers about his 'personal role' in taking decisions regarding the media organisation and its owner Young Indian.

After a day's break, he has been summoned again on Friday.

Mild tension prevailed near the Raj Bhavan in Telangana in Hyderabad, after scores of Congress leaders and workers marched towards it but police foiled their attempts and dispersed them.

The party claimed some of its leaders were injured due to baton charge by police.

She told TV channels that she had no intention of humiliating the police official and merely caught hold of his shoulder as she was about to fall when being pushed.

Protesting Delhi Congress workers were thwarted with water cannons during a march to Lieutenant Governor's residence in New Delhi.

The protest march led by state president Anil Kumar was stopped by the police, minutes after it started from Sushrut Trauma Centre in Civil Lines.

Earlier, Congress MPs met Lok Sabha Speaker Om Birla and Rajya Sabha Chairman M Venkaiah Naidu to raise the issue of Delhi Police action against party lawmakers including some women during their protests in the national capital, and alleged they were treated like 'terrorists'.

They also alleged that their privileges as members of Parliament have been breached and demanded lawful action against Delhi Police.

The Congress has been accusing Delhi Police of criminal trespass by entering the All India Congress Committee office on Wednesday and beating up its leaders in the past couple of days during demonstrations.

They also handed over a pen drive containing videos of the alleged harassment of MPs and how they were 'ill-treated' by Delhi Police personnel.

In Maharashtra, many Congress leaders including senior ministers of the Maharashtra government were detained by police when they tried to remove barricades placed outside the Raj Bhavan gate during their protest march which started near the Hanging Garden in south Mumbai.

Holding placards, banners and posters, they raised slogans against the BJP for the ED's move to question Rahul Gandhi as they took out 'Raj Bhavan Chalo' before they were whisked away in vehicles.

Addressing a gathering, Siddaramaiah said the party is against the 'conspiracy to fix' the Congress leaders.

"We are not against the investigation but we condemn the conspiracy with ill-intention to frame our leader Sonia Gandhi and Rahul Gandhi in false case to tarnish their image," he said.

Later, a Congress delegation submitted a memorandum to President Ram Nath Kovind through Governor Thaawarchand Gehlot requesting him to drop all the 'illegal ED proceedings going on against the leaders of the Congress' and not to prevent party leaders and workers from staging peaceful protests on these issues.

A 10-member delegation of Gujarat Congress led by state party chief Jagdish Thakor called on Governor Acharya Devvrat in Gandhinagar to register their protest against Gandhi's questioning and the police action against party leaders in Delhi.

While the police allowed prominent leaders of the Congress to go inside the Raj Bhavan to meet the Governor, nearly 20 party workers, who tried to stage a demonstration on a road outside the Raj Bhavan were detained, said Deputy Superintendent of Police M K Rana, adding that they were released afterwards.

In Chandigarh, police used water cannon to disperse a group of Congress leaders and workers as they tried to take out a protest march to the Raj Bhavan.

The Congress's Punjab unit led by its chief Amarinder Singh Raja Warring gathered at the party's state headquarters in Sector 15, from where they tried to march on foot towards the Punjab Raj Bhavan, about four to five kilometres away, to lay siege but were soon stopped by the police.

Leader of the Opposition in Punjab Partap Singh Bajwa, State Youth Congress chief Barinder Singh and several MLAs were part of the protest.

The police had put up barricades throughout the route and when some Congress workers tried to jump over them, a water cannon was used to disperse them. Later, they were briefly detained.

Similar protests were also held in Rajasthan, Goa, Nagaland and Jammu and Kashmir among other states during which a number of workers and leaders were taken into preventive custody.