Singh, in a statement, stressed that the Gujarat election was not discussed during meeting with some Pakistani officials at Congress leader Mani Shankar Aiyar's house. 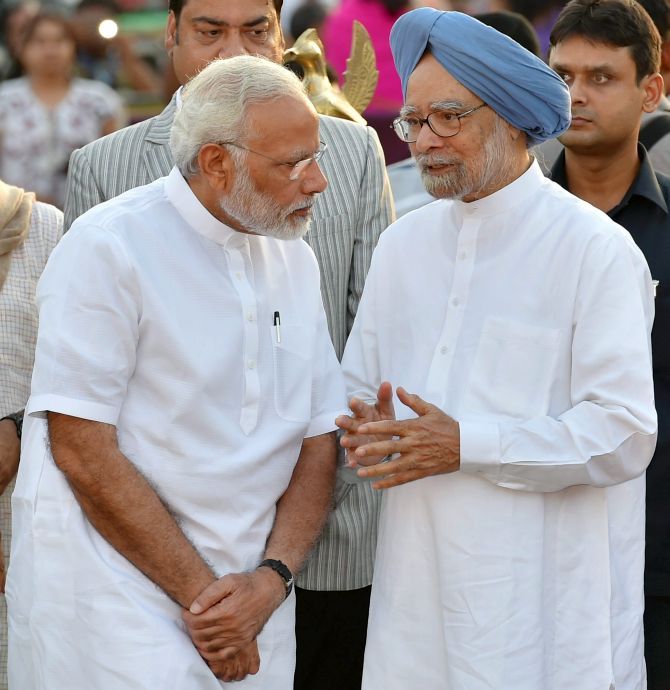 In a sharp counter-offensive on Prime Minister Narendra Modi over his 'conspiracy with Pakistan' remark, former prime minister Manmohan Singh on Monday said he was setting a "dangerous precedent" with his "ill-thought transgression" and asked him to apologise to the nation.

In a strongly-worded statement, Singh rejected as "innuendos and falsehoods" Modi's comments, saying he did not discuss the Gujarat assembly elections with anyone at the dinner hosted by Mani Shankar Aiyar for Pakistan's former foreign minister Kurshid Kasuri in New Delhi.

"I sincerely hope that prime minister will show the maturity and gravitas expected of the high office he holds instead of concentrating his energy solely on erroneously conceived brownie points.

"I sincerely hope that he will apologize to the Nation for his ill thought transgression to restore the dignity of the office he occupies," he said.

Singh said he was "deeply pained and anguished" by the "falsehood and canards" being spread to score political points by the prime minister in what he said was a "lost cause" in Gujarat.

"Fearing imminent defeat in Gujarat, desperation of prime minister to hurl every abuse and latch on to every straw is palpable. Sadly and regrettably, Sh. Modi is setting a dangerous precedent by his insatiable desire to tarnish every constitutional office, including that of a former prime minister and army chief," he alleged.

Addressing an election rally in Palanpur in Gujarat on Sunday, Modi suggested that Pakistan was trying to influence the assembly polls in the state.

He claimed that some Pakistani officials and Manmohan Singh met at Congress leader Mani Shankar Aiyar's house over dinner on December 6. This was a day before Aiyar's "neech" jibe against Modi that led to his suspension.

The Congress Party, Singh said, needs no sermons on "nationalism" from a party and prime minister, whose "compromised" track record on fighting terrorism is well known, while reminding Modi of his "uninvited" visit to Pakistan after terrorist attacks in Udhampur and Gurdaspur.

"Let him also tell the country the reason for inviting the infamous ISI of Pakistan to our strategic Air Base in Pathankot to investigate a terror attack that emanated from Pakistan," he said.

Claiming that his track record of public service to the country over the last five decades is known to all, he said no one, including Modi, can "lamely question it to gain lost political ground".

Singh said the Gujarat issue was never raised by anyone present at the dinner and the discussion was confined to India-Pakistan relations.

"None of them could be accused of indulging in any anti- national activities," he said. 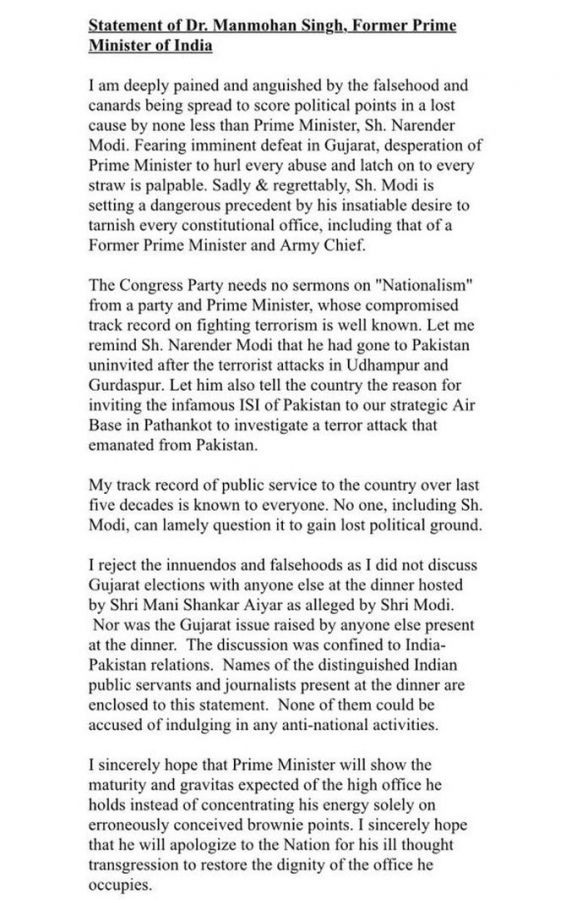 Ruling out an apology by Prime Minister Narendra Modi, Finance Minister Arun Jaitley on Monday charged Manmohan Singh with defying the stated national policy on terror by meeting Pakistani diplomats and demanded to know the context, relevance and necessity of such a meet.

He termed the dinner meeting at Mani Shankar Aiyar's residence as "political misadventure" and said the main opposition party is expected to follow the national line that terror and talks cannot go hand in hand.

Addressing a press conference hours after Singh demanded an apology from Modi, Jaitley said the Congress must explain the context of the meeting.

"It is surprising that for a misadventure that the Congress party indulged in, to which some of its senior leaders became a party, they should expect the Prime Minister of India to apologise for it," he said.

India's national position on talks with Pakistan is well known and all responsible groups in India, including the main opposition party, are expected to honour that, Jaitley asserted.

Stating that this was not the first time that such "misadventures" have taken place, he referred to the Sharm el-Sheikh declaration after Indo-Pak talks "when Baluchistan issue was allowed to enter the text of the agreement and the condition precedent for a dialogue that Pakistan territory should not be used for terrorism was done away with".

He said the Congress and its leadership should come out with detailed facts on what transpired in the meeting and what was its necessity under the present circumstances.

Jaitley said that till yesterday the Congress was denying the meeting and "today instead of accepting this as a misadventure, they try to blame those who are raising this issue".

Asked if the leaders present at the meeting should be tried for treason, he said it is a political misadventure and "it has a political cost".

Asked about Singh's statement that Gujarat elections, as stated by Prime Minister, was not discussed at the dinner, Jaitley said the party must explain the context, relevance and necessity of such a meet.

On Aiyar, he said the suspended Congress leader "has always had an inconsistent position" and maintained "a parallel line of dialogue", "underplayed Pakistan's role in instigating terrorism in India and they continue to engage with them".

"But that responsible section of the Congress party should have become privy to that engagement is indeed worrisome. It's admittedly as I said, a complete misadventure for very senior people in India's public life to have done what some of the senior Congress leaders did.

"And having done that, to expect the Prime Minister of India to apologise for having flagged the issue is indeed beyond comprehension," he wondered.

He said the main Opposition party is expected to follow the national policy, which states that terror and talks cannot go hand in hand.

"Is (the) main opposition party not part of the State?" he asked.

Jaitley said that if anyone defies the national line, he should be prepared to answer questions.

In response to Singh's demand for apology, Jaitley further said people who have violated the national policy of talks and terror not going hand in hand should apologise.

On Singh's comment that remarks by Modi at a public rally had demeaned the office of the Prime Minister, Jaitley said debate never demeans any office.

He also claimed that the BJP is comfortably winning in Gujarat.