Punjab Congress chief Navjot Singh Sidhu on Sunday said the state must concentrate on real issues that concern every Punjabi even as MP Manish Tewari said he never saw "such chaos and anarchy" being played out in the party's state unit. 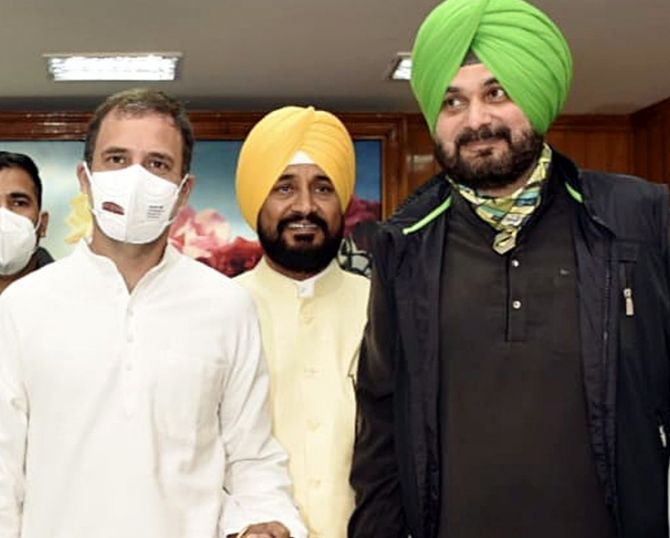 Critical of the infighting in the Punjab Congress, Tewari tweeted that party leaders are "squabbling publicly with each other like children", using "guttural language" that "even fish wives would not use".

The statements by both leaders have come amid the ongoing war of words between Congress leaders and former chief minister Amarinder Singh over his friendship with Pakistani journalist Aroosa Alam, just months before the state Assembly polls.

Amarinder was replaced by Charanjit Singh Channi as the state chief minister after a power tussle with Sidhu and had said he will form a new party.

"Punjab must come back to its real issues that concern every Punjabi and our future generations. How will we counter the financial emergency that stares upon us? I will stick to the real issues and not let them take a backseat!,"Sidhu tweeted earlier in the day.

Sidhu said,"The choice is clear between irreparable damage and the last chance for damage control. Who will bring back state's resources to the state's coffers, instead of them going to private pockets? Who will lead the initiative for resurrection our great state to prosperity!!"

"Let the mist clear, reality shine like the sun upon the roadmap for revival of Punjab, shunning those who protect the selfish vested interests and focus only on the path that will lead to Jittega Punjab, Jittegi Punjabiyat and Jittega Har Punjabi," he added in another tweet.

Meanwhile, Anandpur Sahib MP Manish Tewari expressed his dismay over the ongoing developments in the Punjab Congress and asked whether the party thought the people were not disgusted by the "daily soap opera".

He never saw such "chaos and anarchy as what is playing out" in the Punjab Congress, Tewari said, adding that the "guttural language” was used against each other that "even fish wives would not use".

In a series of tweets, Tewari also questioned the progress on issues like the 2015 desecration incidents, drug menace and power purchase pacts.

The Anandpur Sahib MP was reacting to his reference by Congress general secretary Harish Rawat in an interview to a media house.

"Since you referred to me in this interview I also have great regard & respect for you going back to days when I headed @nsui & you @CongressSevadal. However in my 40 years plus in @INCIndia I have never seen such chaos & anarchy as what is playing out in @INCPunjab today.

Repeated open defiance of AICC by a PCC President, colleagues squabbling publicly with each other like children. Guttural language against each other that even fish wives would not use. For the past 5 months it is @INCPunjab vs @INCPunjab. Do we think that people of Punjab are not disgusted by this daily soap opera," tweeted Tewari.

Tewari also called the Mallikarjun Kharge-led three-member panel formed by the party earlier to end factionalism in the Punjab Congress as “a serious error of judgment”.

"Irony is that those who complained loudest of transgressions & aberrations were unfortunately & continue to be worst offenders themselves. History would record that the appointment of the Committee that ostensibly heard perceived & real grievances was a serious error of judgment," he said.

"Where is progress on the issues that agitated these MLA's & other eminences--Bargari,drugs, power PPAs, illegal sand mining. Has there been any movement forward," asked Tewari.

During his meeting with Congress senior leaders K C Venugopal and Harish Rawat in Delhi recently, Sidhu too had raised his concerns over the 18-point agenda taken up by the leadership on which actions are pending.

Sidhu had written a letter to party chief Sonia Gandhi on October 15, flagging the issues which the government "must deliver upon" and saying it is the poll-bound state's "last chance for resurrection and redemption".

Sidhu had pitched for a Punjab model with a 13-point agenda to be part of the Congress manifesto for the 2022 Assembly elections.