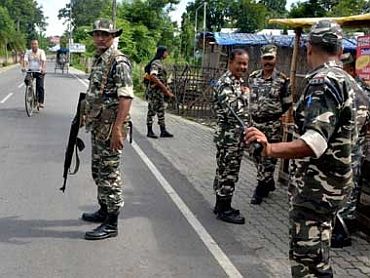 A Manipur Police commando and two police constables were killed while nine others were injured when militants ambushed road-opening parties at two different places in Chandel district of Manipur on Thursday.

Earlier reports said four personnel were killed and another four injured in the ambush at Lokchao and Bongyang areas in the hill district of Chandel.

The twin attacks took place as United Naga Council was gearing up for a mass rally in four Naga district headquarters today against the creation of the seven districts in the state by the O Ibobi Singh-led government.

The first ambush occurred at Lokchao, 21 km from the border town of Moreh, when the police team was heading for Tengnoupal where Chief Minister was scheduled to attend a programme in connection with the inauguration of the newly created Tengnoupal district, which was carved out of the existing Naga-dominated Chandel district.

The Chief minister was scheduled to attend another programme in connection with the formal inauguration of Kangpokpi district which was bifurcated from the Naga-dominated districts Senapati and Ukhrul districts.

Ibobi Singh, who attended the formal inauguration of Tengnoupal district, returned to Imphal by a chopper, the police said.

Speaking to reporters in Tengnoupal, the chief minister said, "It is of no use to attack Manipur Police and all disputes must be resolved through dialogue".

He announced an ex-gratia of Rs 5 lakh to the nearest kin of the police personnel killed in the ambush.

The two police constables were identified as Ayub Khan and Nonglei Charang Marring.While Ayub Khan died at the Lokchao ambush spot, the other police personnel died on way to Imphal for treatment.

The Manipur police commando, who succumbed to injuries in the second ambush at Bongyang, has been identified as Havildar Yengkhom Jeevan, the police said.

The nine policemen were injured at Lokchao, the sources said, adding security forces rushed to the two spots in Chandel district.

The United Naga Council, which has been enforcing economic blockade on NH 53 and NH 39, the lifeline of the landlocked state, since November 1 last, is also demanding imposition of President's Rule in the state.

Floral tributes were paid to the three Manipur police personnel who were killed in the ambush.

In a solemn ceremony held at the 1st M R grounds, gun salute was given in honour of the deceased cops.

Chief Minister O Ibobi Singh reacted sharply to the twin ambush and said the government would not be threatened by such acts of terror and would give a befitting reply to those who carried out the heinous acts.

Government jobs would be provided to the next of kin of the deceased, Singh said.

The unidentified militants first fired upon a team of police commandos during which personnel of some state forces were injured, a senior police officer said.

The police commandos also retaliated and firing has stopped as of now, added the police officer.

The latest attack took place as Noney town was all geared up for Friday’s programme during which the newly-created Noney district, bifurcated from the Naga-dominated Tamenglong district, will be formally launched.