At least eight people were killed and over 70 others went missing after a massive landslide occurred at a railway construction site in Manipur's Noney district, officials said on Thursday. 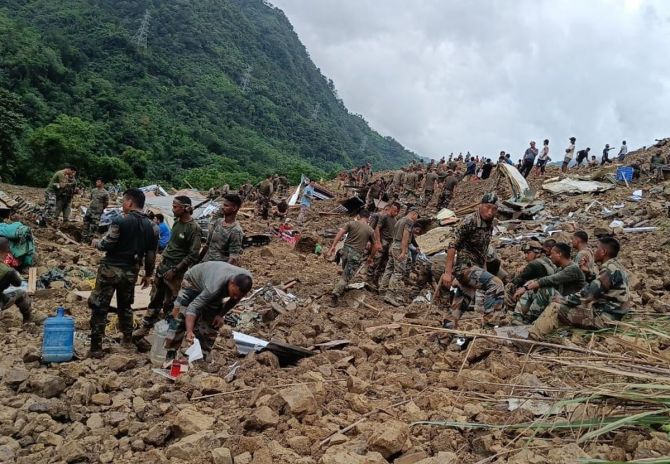 Eight bodies have been retrieved so far, including those of seven Territorial Army personnel, they said, adding, rescue operations are underway.

Around 72 people are feared trapped under the debris, which includes 43 from the Territorial Army.

The massive debris has blocked the Ijei River, creating a reservoir that may inundate low-lying areas.

An advisory issued by Noney deputy commissioner said, 'Due to the unfortunate landslide which occurred at Tupul yard railway construction camp, where casualties are being reported and dozens buried alive, the flow of the Ijei River has also been obstructed by the debris, creating a dam-like storage condition which if breached will wreak havoc to the low-lying areas of Noney district headquarters...'

'...as the condition is still developing and the future is unknown, the general public is hereby advised to take their own precautions, and especially ensure children do not come out near the river. Whoever can evacuate are also advised to evacuate.

'Public are further advised to stay alert and be prepared for any assistance in case of rain condition deteriorate further,' it added.

It also advised travellers to avoid National Highway 37 due to multiple road blockages.

Shah said a team of the National Disaster Response Force (NDRF) has reached the landslide site while two more teams are on their way.

'Spoke to CM Shri @NBirenSingh and Shri @AshwiniVaishnaw in the wake of a landslide near the Tupul railway station in Manipur. Rescue operations are in full swing. A team of NDRF has already reached the spot and joined the rescue operations. 2 more teams are on their way to Tupul,' Shah tweeted.

The chief minister has called an emergency meeting to assess the situation.

'Called an emergency meeting to assess the situation of the landslide in Tupul today. The search and rescue operation is already underway. Let's keep them in our prayers today. Ambulances along with doctors have also been dispatched to assist in the operation,' Singh tweeted.

Governor La Ganesan condoled the deaths and prayed for the speedy recovery of the injured.

'The governor of Manipur is deeply shocked to hear the sad news of landslide due to intermittent rain the state...he conveys deepest condolences to the bereaved families and prays to God for speedy recovery of the injured persons,' a statement from Raj Bhavan at Imphal said.

Congress leader Rahul Gandhi also mourned the loss of lives in the incident.

"The news of a tragic landslide near Tupul Yard railway construction camp in Noney District, Manipur is extremely distressing… My condolences to the bereaved families who have lost their loved ones and prayers for speedy recovery of those injured," Gandhi wrote on Twitter.