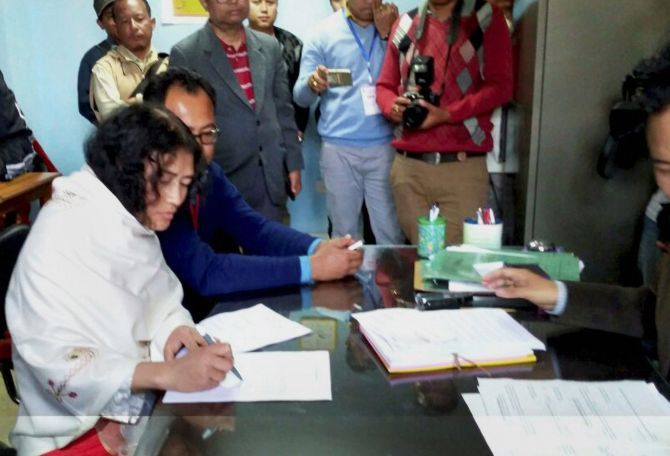 Activist Irom Sharmila, who is making her electoral debut in the Manipur polls, said on Sunday that she has not given up her fight against controversial law Armed Forces (Special Powers) Act but only changed her strategy.

Sharmila said a section of people even wanted her ‘martyrdom’ during the 16-year old fast against the AFSPA that she decided to end last year.

The activist went on to form her own party -- Peoples Resurgence and Justice Alliance -- and has decided to fight the March assembly elections with the sole agenda of withdrawal of the Act from Manipur.

"Even if one of us wins, we will be the voice of the people inside the assembly and will question the AFSPA on the floor of the House," she responded to questions on why her party PRJA had fielded only three candidates and whether they could play an important role in the 60-member assembly if they win.

On what would she do if the PRJA fails to taste success in the polls, she said, “Even if we fail, we will continue our fight. We will stay in politics and fight the next parliamentary elections.”

During the interview Sharmila said, “The AFSPA has never been an issue in the polls. But I want to make a point in the elections that the AFSPA is not only a draconian law but also one which is a gross violation of human rights.

“Even now other parties are talking about alleged fake encounters in the state,” she said.

On her journey from being an activist to a politician, Sharmila said, “The fast was an emotional fight. But after 16 years I realised that it didn’t achieve any purpose. But when I withdrew my fast a lot of people in Manipur misunderstood me, they thought I had given up.

“A section of people even wanted my martyrdom during fast. But the fact is I have not given up the fight against the AFSPA, I have only changed my strategy,” she said.

Sharmila, who is also known as the ‘Iron Lady’ said when she had met people and explained to them about her new strategy, they understood her and gave their blessings.

“People now have understood me and are with me,” she said.

Criticising both the Congress and the BJP, she said, “The economic blockade is a gameplan of the BJP and the Congress to divert the attention from the demand of withdrawal of AFSPA and misrule and corruption of the Congress government.”

Sharmila said, “You will see that by this economic blockade the Congress and the BJP have shifted the entire focus of politics on blockade. They are not doing any kind of constructive movement.”

On whether there is any possibility of her party joining hands with the BJP in case of a hung assembly, the 44-year-old activist-turned-politician said, “There is no chance of going with Congress or BJP after elections. PRJA will prefer to go with small political outfits like CPI (Communist Party of India), CPI-M (Communist Party of India-Marxist) and others who are against the AFSPA.”

An indefinite economic blockade was launched by United Naga Council since November 1, 2016 against the state government’s decision to create seven new districts in the landlocked state by dividing the existing ones.

The blockade severely affected the supply of essential commodities, including fuel in the state.

The state government has, however, claimed that the decision was taken to improve administrative efficiency.

Sharmila said neither the Congress nor the BJP is ‘serious’ about a dialogue with the UNC and convince them to lift the blockade.

“Rather, they (the Congress and the BJP) want to stretch the matter,” she said.

Facing severe shortage of funds and manpower, the PRJA has taken to online crowd funding.

It is the first regional party in Manipur which has resorted to finance poll expenses through crowd funding and has so far collected Rs 4.5 lakh through it.

“I campaign on my cycle. I don't believe in publishing posters and hand bills. Your work, your movement for the people will speak for you. I think less than Rs 1 lakh is enough for a candidate to fight elections if they follow my style of campaigning,” she said. 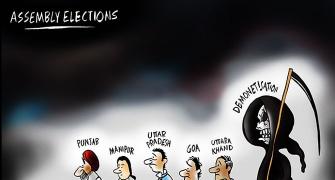 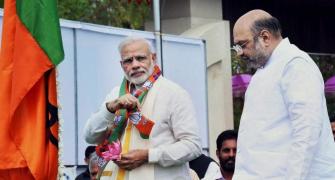 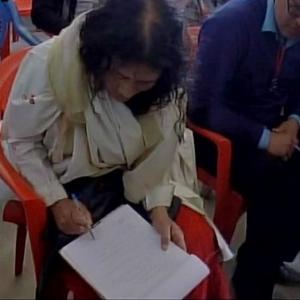 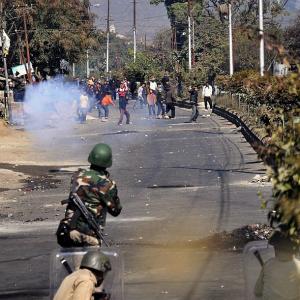