The Bharatiya Janata Party on Tuesday took four National People's Party ministers who resigned from the N Biren Singh-led Manipur government to Delhi for a meeting with central leaders to salvage the situation in the northeastern state, BJP sources said. 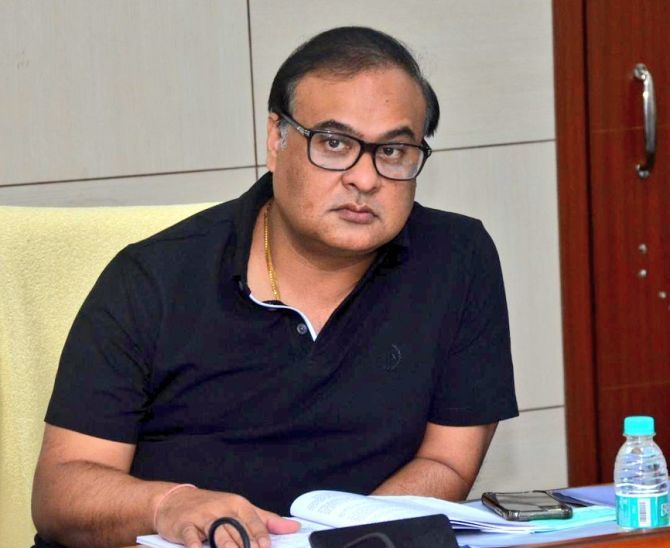 During a fresh round of talks with North-East Democratic Alliance (NEDA) convenor Himanta Biswa Sarma earlier in the day, the NPP leaders stuck to their demand for change in the leadership of the BJP-led coalition government, they said.

Sarma, the saffron party's key troubleshooter in the Northeast, accompanied the four to Delhi in a special aircraft.

The talks were inconclusive in Imphal and that is why they need to go to Delhi, a BJP leader said.

"The crisis will be resolved very soon," Sarma said before leaving Manipur.

As the NPP has only four MLAs in the House, the party effectively withdrew support from the government.

The Congress roped in these nine rebels and formed a coalition called the Secular Progressive Front (SPF).

State Congress president Moirangthem Okendra said the party is hopeful that the four NPP leaders will not succumb to the pressure of the BJP and an SPF government will come to power dislodging the N Biren Singh dispensation.

Sarma and Meghalaya Chief Minister and NPP president Conrad Sangma reached Imphal in a special aircraft and met the four leaders at the farm house of L Jayantakumar, one of the ministers who resigned, at Ghari in Manipur's Imphal West district.

Sources said the BJP leader pleaded with them to change their decision but they said the leadership of the state government has to be changed.

This is the second round meeting of Sarma and Sangma with the four leaders after the one held on Sunday.

From Jayantakumar's farm house, Sarma went to meet the chief minister at his residence, but what transpired at that meeting is not known.

Later, he left for Delhi, taking along the four NPP leaders, in the same aircraft that brought him to Manipur.

NPP's Manipur unit president Thangminlien Kipgen had on Monday said there could be a solution to the crisis if the attitude of the leadership of the ruling BJP-led coalition changes towards its alliance partners.

"The leadership must ensure that opinions of members of coalition partners are invited before taking major decisions," he said.

Kipgen was one of the leaders who was part of an SPF delegation that called on Governor Najma Heptulla on June 18 and urged her to call a special assembly session soon to take up a no-confidence motion against the BJP-led government.

The Congress has claimed that the four rebel BJP MLAs have joined the party.

State BJP president S Tikendra Singh exuded confidence that the party will win if a floor test is conducted in the Assembly.

After the victory of BJP candidate Leishemba Sanajaoba in the Rajya Sabha election, the party claimed that it is in command in Manipur.

The figure in support of Chief Minister Biren Singh stood at 23 -- 18 MLAs of the BJP, four of the Naga People's Front (NPF) and one MLA from the Lok Janshakti Party.

The Congress asserted that the SPF has the backing of 29 lawmakers -- 20 of its own, four of the NPP, three of the BJP who had quit, one from the TMC and an Independent.

One Congress MLA who joined the BJP-led government was disqualified from the membership of Manipur Legislative Assembly recently, reducing the strength of the house to 59. Assembly election in Manipur was held in 2017.