British Prime Minister Theresa May said that the United Kingdom has raised the threat level to maximum and the government was preparing to send soldiers on to streets as a second terror attack may be imminent after the Manchester pop concert bombing. 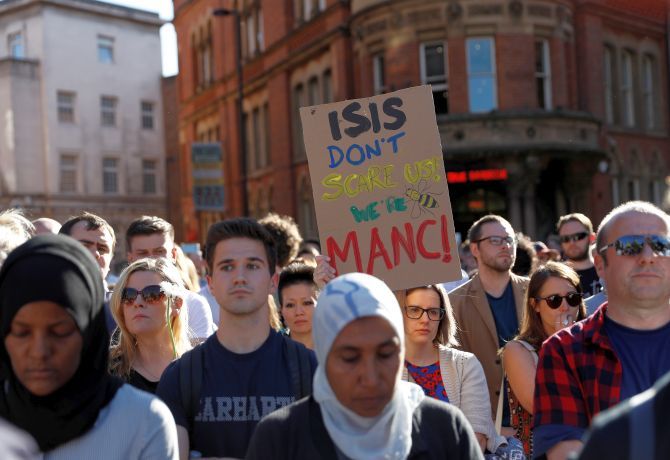 May raised the threat level from severe to critical for the first time since 2007, saying the decision was taken after security forces were unable to rule out if Salman Abedi, the British-born suspect behind Monday's suicide bombing at the concert in Manchester city that killed 22 people, acted alone.

The raising of the threat level mean further attacks may be imminent. The move will see the army deployed to secure key sites.

"It is a possibility that we cannot ignore, that there is a wider group of individuals linked to this attack," May said in a live address on Tuesday night after she chaired a meeting of the government's emergency response Cobra committee.

She said, "The change in the threat level means that there will be additional resources and support made available to the police as they work to keep us all safe".

"As a result of (the Joint Terrorism Analysis Centre's) decision the police have asked for authorisation from the Secretary of State for Defence to deploy a number of armed military personnel in support of their armed officers."

She said the request was part of an established plan known as Operation Temperer. "This means that armed police officers responsible for duties such as guarding key sites will be replaced by members of the armed forces, which will allow the police to significantly increase the number of armed officers on patrol in key locations."

It is the first time that the operation, which was first revealed in 2015, has been put into effect. Up to 5,000 soldiers will be deployed on Britain's streets as a result of the move.

"You might also see military personnel deployed at certain events such as concerts and sports matches, helping the police to keep the public safe. In all circumstances, members of the armed forces who are deployed in this way will be under the command of police officers," she said.

May said she did not want the public to feel "unduly alarmed" but said it was a "proportionate and sensible response".

Her statement came after the 22-year-old Libyan-origin Abedi was identified as the perpetrator behind the attack at a concert of American pop star Ariana Grande. Among those killed and wounded were children and young people.

The Islamic State group has claimed responsibility for the bombing and warned of more such attacks.

Intelligence experts believe the device detonated at the concert was so sophisticated that Abedi must have either been given specialist training abroad or he may have used a bomb made by a technician who has not yet been captured.

The highest threat level, which is decided by the Joint Terrorism Analysis Centre has only been reached twice before.

The first time the threat level was raised to critical was in 2006 during a major operation to stop a plot to blow up transatlantic airliners with liquid bombs.

It was raised again the following year as security officials hunted for the men who had tried to bomb a London nightclub, before going on to attack Glasgow Airport.

IMAGE: People attend a vigil for the victims of the attack on concert goers at Manchester Arena. Photograph: Peter Nicholls/Reuters