A 25 year-old Hindu man was killed in broad public view in Hyderabad by his Muslim brother-in law and another person in a case of suspected "honour-killing," with the incident sending shockwaves after the gory murder that was caught on camera went viral. 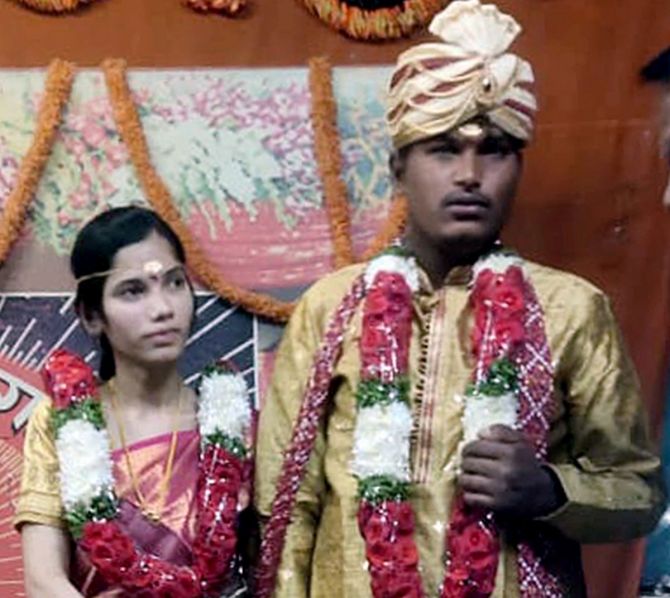 IMAGE: B Nagaraju with his wife. Photograph: ANI Photo

The incident happened on Wednesday night at Saroornagar when the victim, B Nagaraju, a Dalit, was travelling on a motorbike with his wife and was confronted by his attackers -- Syed Mobin Ahmed and Mohammed Masood Ahmed -- who came on a scooter, stopped the couple on the road and attacked the deceased in full public view with an iron rod before stabbing him with a knife, killing him on the spot, the police said.

Both the persons have been arrested.

The police said Syed Mobin Ahmed was opposed to his sister's relationship with Nagaraju, and had even warned her against it.

After stopping the couple, the duo pushed Nagaraju to the ground and beat him up indiscriminately with the rod and stabbed him, confirmed he was dead and finally fled the place, the police said.

Both the accused were arrested on Thursday. Deputy Commissioner of Police (LB Nagar Zone) Sunpreet Singh told reporters a murder case under relevant IPC sections and the SC/ST (Prevention of Atrocities) Amendment Act, 2015 was registered.

The case would be tried in a fast-track court, the DCP added.

The victim's distraught wife told the media she had known her husband for the last 11 years and claimed five persons attacked him.

The Hindu-Muslim couple were classmates in school and college and were in love since more than five years even as her family was against the relationship. They got married in January this year against the wishes of her family members, the police said.

Mobin Ahmed had warned his sister in the past, the police said, adding that she subsequently walked out of her house to marry Nagaraju.

Since then Mobin Ahmed was nursing a grudge against Nagaraju, the police said.

He had been planning to eliminate Nagaraju and along with his relative hatched a plan and implemented it on Wednesday, the police said. The victim's father also alleged Mobin Ahmed was opposed to the inter-faith marriage.

The couple had got married at Arya Samaj in the Old City of Hyderabad on January 31.