A 32-year-old Kashmiri man, who was injured in a grenade attack at a bus stand in Jammu, succumbed to injuries Friday, raising the death toll to two, officials said. 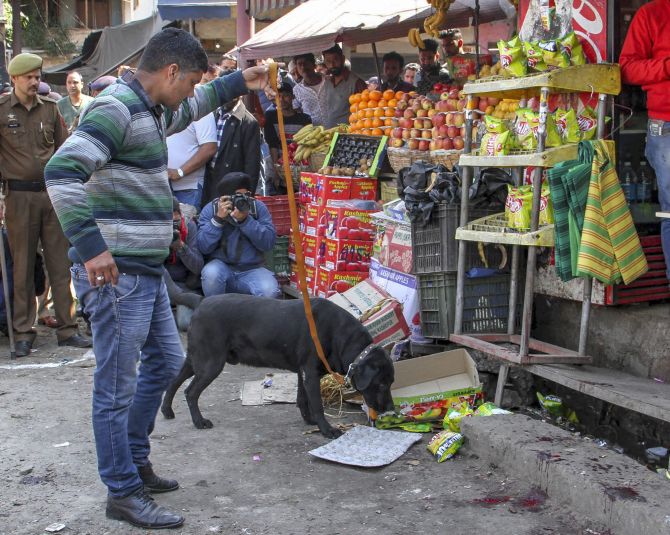 IMAGE: Police personnel with a sniffer dog inspect the site after a powerful explosion at a bus stand in Jammu. Photograph: PTI Photo

Mohammad Riyaz, a resident of Anantnag district's Mattan village, died while undergoing treatment at the Government Medical College hospital in the early hours, the officials said.

A teenager, Mohammad Sharik, from Uttarakhand was killed and 32 others injured when a powerful blast rocked the crowded general bus stand around Thursday afternoon.

Within hours of the incident, police arrested the accused and said he was tasked by terror outfit Hizbul Mujahideen to carry out the attack.

Bhat, who had reached Jammu along with the grenade Thursday morning after he left Kulgam the previous night, was fleeing after the attack when he was arrested by alert policemen at Nagrota in the outskirts of the city, he had said.

The third grenade attack by terrorists on Jammu bus stand since May last comes just three weeks after the Pulwama terror strike on February 14 that killed 40 Central Reserve Police Force jawans, bringing India and Pakistan on brink of war.