A 29-year old man was on Wednesday arrested in connection with the incident relating to the alleged assault of a woman pilgrim at the Lord Ayyappa Temple in Sabarimala, suspecting her to be of menstrual age. 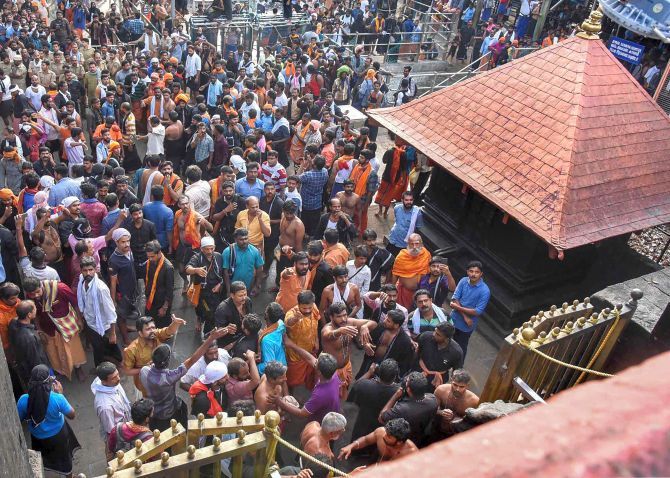 IMAGE: Devotees stage a protest at Sabarimala temple after a woman who reached near the 18 holy steps of the hilltop shrine was heckled by agitators over her age at Sabarimala. Photograph: PTI Photo

Sooraj, hailing from Elanthur in Pathanamthitta district, was one of the main accused in the incident which took place on Tuesday when the hill shrine was opened for the two-day-long “Chithira Atta Thirunal,” a special ritual.

Hundreds of frenzied devotees had tried to attack and prevent 52-year old Lalitha Ravi from offering prayers at the temple.

The man was arrested under non-bailable charges -- IPC 308 (attempt to commit culpable homicide) and 354 (assault or criminal force to woman with intent to outrage her modesty), police said.

Investigation is on to nab the remaining accused, said Pathanamthitta SP, T Narayanan.

The man was arrested on the basis of digital evidence and photographs, he said.

Police had registered cases against 200 “identifiable” persons for trying to prevent Lalitha, who had come for the ‘choorunu’ (rice-giving) ceremony of her grandchild, from praying at the temple.

Clapping and chanting ‘Ayyappa Saranam’, a huge crowd of devotees surrounded Lalitha suspecting her to be of menstrual age, but police intervened and escorted her out.

The woman showed her Aadhaar card to them to prove that she did not belong to the “traditionally barred” age group of 10-50 years.

Police later escorted her to the shrine to offer prayers along with other women relatives.

It was the second time in the last three weeks that the doors of the hill temple opened after the Supreme Court had allowed entry of women of all age groups into Sabarimala.