Source: PTI
February 08, 2010 11:53 IST
The Delhi high court on Monday sentenced the prime convict in the 2002 Maulana Azad Medical College student rape case to life imprisonment. Observing that the accused Rahul had acted "not only as a beast but even acted savage," a bench headed by Justice Pradeep Nandrajog upheld the trial court verdict, which had sentenced him to life imprisonment.

The court, however, acquitted the other convict Amit on charges of rape and directed the police to release him, as he had already undergone seven years of imprisonment.

The convicts -- Rahul and his accomplice Amit -- were held guilty of raping a medical student by a trial court in January 2005. The victim, a fourth-year student of the Maulana Azad Medical College, was raped at knife point on the terrace of the Mughal monument 'Khooni Darwaza' in central Delhi on November 15, 2002.

The Delhi police had in 2003 filed a chargesheet against four persons -- Rahul, Amit, Mohan Lal and Ashok -- in the case which had sent shockwaves across the nation.

The victim had been dragged inside the monument, located opposite the main gate of the college, while she was trying to cross the road, and raped at knife point. 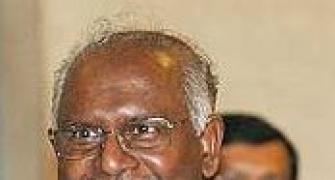