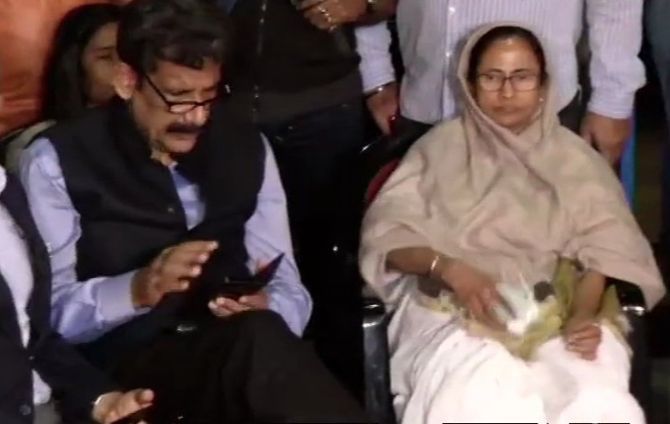 Launching a scathing attack on the Centre after a Central Bureau of Investigation team made an unsuccessful bid to question the Kolkata Police commissioner on Sunday, West Bengal Chief Minister Mamata Banerjee accused Prime Minister Narendra Modi and Bharatiya Janata Party president Amit Shah of trying to organise a coup in the state.

She also alleged that National Security Advisor Ajit Doval was directing the CBI to harass political opponents, as per orders of the prime minister.

"I feel ashamed to talk to such a prime minister who has blood on his hands," she said.

"Narendra Modi and Amit Shah are trying to organise a coup in the state as we had organised the opposition rally on January 19.

"We were aware that the CBI will attack us after we organised the rally," Banerjee said, referring to the Brigade rally attended by leaders of about 20 opposition parties.

"Our government arrested chit fund owners when we came to power. It is we who formed an SIT to probe the matter," she said in a hurriedly-called press conference outside Kolkata Police Commissioner Rajeev Kumar's residence.

Banerjee later staged a 'Save the Constitution' dharna at Metro Channel, Kolkata, which was also joined by Rajeev Kumar.

In an unprecedented development, a number of CBI officers, who had gone to question Kolkata Police chief Rajeev Kumar in connection with chit fund scam cases, were bundled into police jeeps, whisked to a police station and detained on Sunday.

The ruling Trinamool Congress wondered whether the BJP was attempting a constitutional coup in the state.

'BJP planning a constitutional coup? 40 CBI officials surround Kolkata Police Commissioner's home. Destruction of institutions goes on unabated. Our demand in #Parliament on Mon. Modi has to go. We are reaching out and sharing this with all Oppn parties who want to #SaveDemocracy,' TMC national spokesperson Derek O' Brien tweeted.