The results will be announced on May 2. 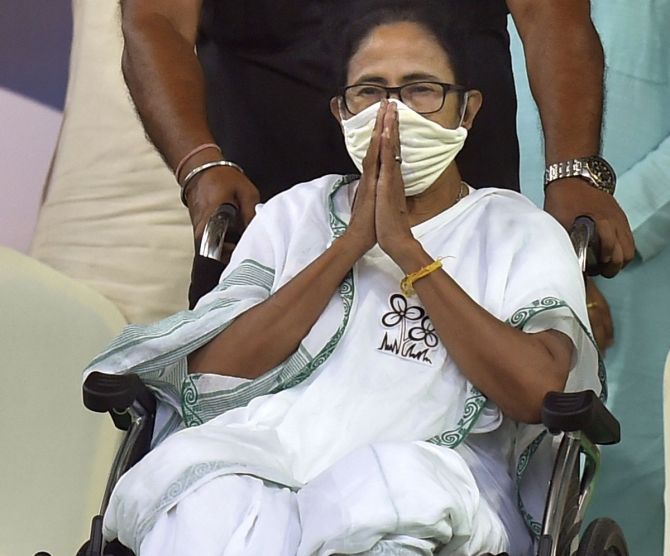 Exit polls on Thursday forecast a tight contest between the incumbent Trinamool Congress and the Bharatiya Janata Party in the high-profile West Bengal assembly polls and put the saffron combine ahead in Assam, while projecting a win for the ruling Left alliance in Kerala and for the Dravida Munnetra Kazhagam-led opposition in Tamil Nadu.

The exit poll numbers were largely a setback for the Congress, which while falling short in Assam and Kerala may also lose its government in the union territory of Puducherry to the opposition alliance of All India N.R. Congress-BJP-All India Anna Dravida Munnetra Kazhagam.

Exit polls were, however, divided in their forecast for the West Bengal polls, where the BJP ran a high-octane campaign in its bid to capture power in the state for the first time by ending Chief Minister Mamata Banerjee's 10-year old reign.

However, Times Now-C Voter predicted a clear majority for the TMC by projecting 158 seats for the party and 115 for the BJP.

Jan Ki Baat exit polls, however, predicted a strong majority for the BJP in West Bengal, giving it 162-185 seats, against 104-121 to the ruling TMC.

The Left-Congress alliance was forecast to be further marginalized in the fiercely bipolar contest.

Kerala Chief Minister Pinarayi Vijayan may defy the norm in his state of the two main alliances alternating in power by leading the Communist Party of India Marxist-led alliance to another spell in power, going by various exit polls.

Axis My India predicted a big win for the LDF by projecting 104 seats for it in the 140-member assembly and predicting only 20-36 seats to the Congress-led UDF.

Today's Chanakya forecast 93-111 seats for the LDF and 26-44 for the UDF in 140-member strong Kerala assembly. CNX predicted a closer fight but still projected a majority of 72-80 seats for the ruling alliance against 54-64 for the opposition.

In another key southern state, Tamil Nadu, Axis My India and CNX forecast a big win for the DMK-led alliance that also includes the Congress.