West Bengal Chief Minister Mamata Banerjee on Thursday relieved Partha Chatterjee, who has been arrested by the Enforcement Directorate in the school jobs scam case, of his duties as minister in charge of several heavyweight portfolios including commerce and industry. 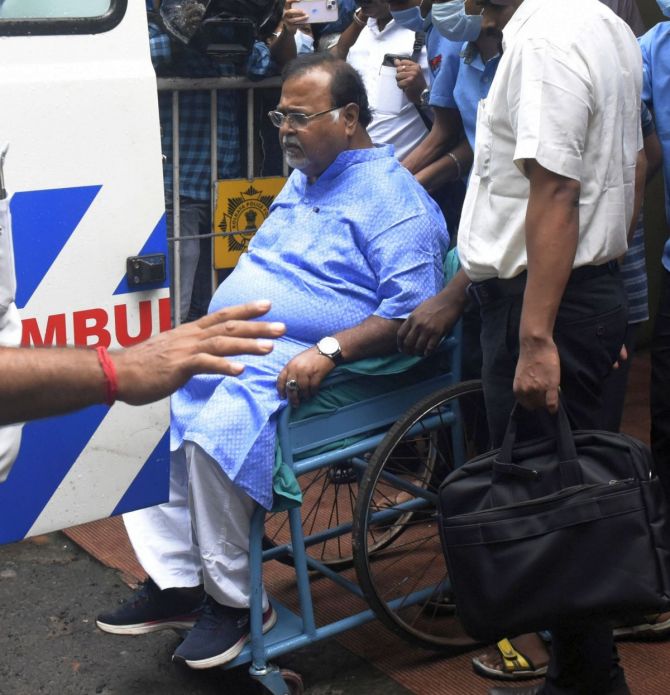 IMAGE: West Bengal Minister Partha Chatterjee (in wheelchair) being shifted to AIIMS Bhubaneswar from SSKM hospital via air ambulance as per an order of the Calcutta high court, in Kolkata, on July 25, 2022. Photograph: PTI Photo

Chatterjee was also removed from all party posts and suspended from the Trinamool Congress.

His removal from these key portfolios and positions in the party came hours after TMC spokesperson Kunal Ghosh demanded his ouster from the cabinet and expulsion from the party.

Banerjee later said at a government event here that she will look after the portfolios held by Chatterjee till she reshuffles the cabinet.

"It has been decided that Partha Chatterjee will be removed from all party posts. He will remain suspended from the party till the time the investigation is underway," TMC national general secretary Abhishek Banerjee said.

He also demanded that the investigation be completed within a fixed time frame.

The ED arrested Chatterjee, the TMC secretary-general, on July 23 in connection with its investigation into alleged irregularities in the recruitment drive by the School Service Commission.

The central agency has also arrested Chatterjee's close associate Arpita Mukherjee and seized crores of rupees from her houses in different parts of the city.

Reacting to the development, BJP's West Bengal president Sukanta Majumdar alleged that the TMC leadership was trying to make Chatterjee a scapegoat.

"There are several people involved in this. Sacking Partha da alone will not save TMC," Majumdar asserted.

Bikas Bhattacharya, Communist Party of India-Marxist leader and the lone Rajya Sabha MP of the Left Front from West Bengal, told reporters: "The main culprit is the chief minister. Ask people to remove her from the CM's post constitutionally."

Earlier in the day, TMC state general secretary Kunal Ghosh had demanded Chatterjee be sacked from the cabinet and expelled from the party, after nearly Rs 50 crore in cash was recovered from properties linked to him.

"Partha Chatterjee should be removed from ministry and all party posts immediately. He should be expelled. If this statement is considered wrong, party has every right to remove me from all posts. I shall continue as a soldier of @AITCofficial (TMC)," Ghosh tweeted.

Ghosh later tweeted that he was deleting the post, and it was his personal opinion.

TMC spokesperson Debangshu Bhattacharya, whose 'Khela Hobe' (there will be a game) song headlined the party's 2021 assembly election campaign, had also sought Chatterjee's expulsion from the party.