West Bengal Chief Minister Mamata Banerjee on Wednesday paid a visit to Nobel laureate Abhijit Banerjee's house in South Kolkata and congratulated his mother on her son's success and said the state government was keen to utilise his services. 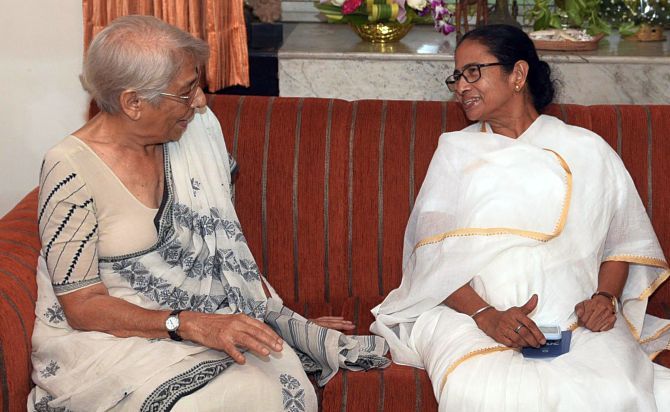 The chief minister who was accompanied by senior officials also exchanged pleasantries with Nirmala Banerjee, Abhijit's mother and a noted economist herself, and said the government was also keen on utilising her services too.

"We are all proud of him. In whatever way we can, subject to the time he can spare, we want to involve him in various pro-poor efforts of the government," Mamata Banerjee told reporters.

Addressing Nirmala as 'aunt', Banerjee said she has briefed her about the pro-poor schemes and projects of the state government.

"Our secretary of agriculture department will brief her about our projects. There is the health department, woman and child welfare department, rural development department, education department where she can also help us," the chief minister said in presence of Nirmala Banerjee after coming out of her residence.

Abhijit Banerjee, an Indian-American, jointly won the Nobel prize in economics along with his wife Esther Duflo and Michael Kremer. He bagged the award for his "experimental approach to alleviating global poverty".

Abhijit Banerjee is scheduled to arrive in the city on the night of October 22.

The chief minister on Monday in a tweet had congratulated Abhijit.

"Hearty congratulations to Abhijit Banerjee, an alumnus of South Point School & Presidency College Kolkata, for winning the Nobel Prize in Economics. Another Bengali has done the nation proud. We are overjoyed," Banerjee said in a tweet.

Banerjee is an alumnus of South Point School in the city and Presidency College, Calcutta, where he completed his BSC degree in economics in 1981. He received his PhD in 1988 from Harvard University.

Banerjee, 58, is currently the Ford Foundation international professor of Economics at the Massachusetts Institute of Technology.