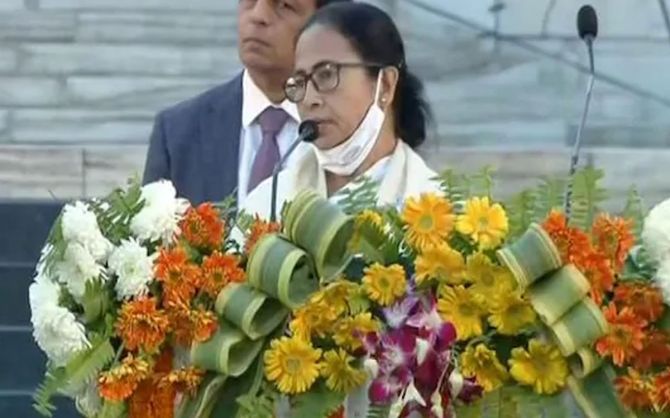 Banerjee had not started her speech when the slogan was raised by a section of the crowd at the Victoria Memorial event to celebrate the 125th birth anniversary of the legendary freedom fighter.

She said such "insult" was unacceptable.

"This is a government programme and not a political programme. There has to be dignity. It doesn't behove anybody to invite people and insult. I won't speak. Jai Hind, Jai Bangla," she said, wrapping up.

Reacting to the development, TMC's chief spokesperson Derek O' Brien said that no one can teach dignity.

"Dignity (noun): The state or quality of being worthy of honour and respect. You can’t teach dignity. Nor can you teach lumpens to be dignified. Here is a one-min video of what exactly happened today. Including the dignified response by @MamataOfficial," he said in a tweet, sharing the video clip.

The BJP leadership, however, saw nothing wrong with the "Jai Shri Ram" slogans.

"None of the dignitaries said anything. Why did she lose her cool? It reflects her mindset of appeasement politics. (She) appeases a particular community before elections," BJP national general secretary and Bengal-minder Kailash Vijayvargiya told PTI.

Assembly polls are due in the state in April-May this year.

"Why does she losses her cool every time someone raises this slogan? She should not have reacted like this. People raise this slogan because she reacts like this," Ghosh said.

BJP leader and grandnephew of Netaji, Chandra Kumar Bose, said there is nothing wrong with the slogan and Netaji's birth anniversary should not be mixed with politics.

In a statement, state Congress president Adhir Ranjan Chowdhury said that some people insulted the chief minister of West Bengal by raising the slogan when she stood up to address the programme.

"By raising ‘Jai Shri Ram’ slogan in a government function, they have not only insulted her, but also the CM of the state, deliberately. They have also insulted a woman in public. I may be her political rival but I strongly condemn it," Chowdhury, also the Leader of the Congress in the Lok Sabha said.

However, he also asked the chief minister to ensure that functions of the state government are not turned into political events.

Claiming that Banerjee turns every government programme from block level to the state secretariat into her party's event, CPI-M leader Md Salim expressed hope that the chief minister will not do it as long as she is in the chair.