'Maligning the medical fraternity was not expected of PM'

The Indian Medical Association and the Mumbai Association of Medical Consultant have written a letter to Narendra Modi expressing disappointment over his statement during the Bharat ki Baat Sabke saath event in London. 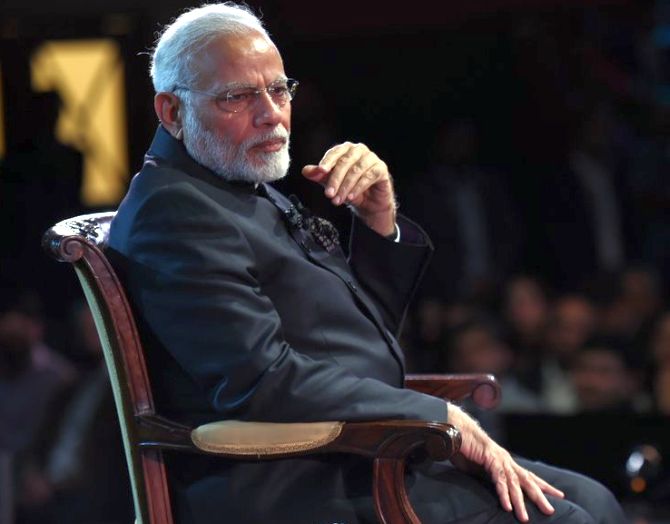 The Indian Medical Association and the Mumbai Association of Medical Consultant has expressed disappointment over Prime Minister Narendra Modi’s statement in London where he had highlighted an alleged nexus between doctors and pharmaceutical firms and said that doctors attend conferences abroad to promote these companies.

The medical bodies have written a letter to Modi expressing their dissent over his statement.

In a press statement, IMA Secretary-General Dr R N Tandon said that the health system of the country would collapse without Indian doctors and added that the statement made by the prime minister is not accepted.

“Indian doctors have brought international acclaim and repute due to their world-class proficiency and skill. Engaging in small talk and maligning the entire medical fraternity in India with a broad brush on foreign soil was certainly not expected out of the prime minister of the country,” Dr Tandon said in the statement.

“IMA expresses its displeasure on your unfortunate remarks,” he added.

He also alleged that doctors of India are being “suppressed and exploited” by every means possible and put the onus of the “mess in healthcare” on the Centre.

The statement further read that the IMA has always supported the use of generic drugs, but the only hitch is the issue of quality assurance.

“The current level of quality testing by the Centre is less than one per cent of the total drugs manufactured. In such a state of affairs, how can doctors betray the confidence of the patients and support the populistic posturing of the government?” Dr Tandon asked.

He further assured the prime minister that the day the central government would be able to assure the quality of all the drugs manufactured in India, they will “find the doctors of this country wanting.”

“India has a robust price control policy for drugs. This being so why does the government allow huge profit margin in the pharmaceutical industry?” Dr Tandon asked.

“Why is a pharmaceutical company allowed pricing the same drug categorised under different names with different profit margins?” he said, adding that the Indian doctors in no way control the price of drugs or stems.

“We are all saddened by Prime Minister Modi’s remarks on Indian doctors, that also in a country (United Kingdom) where the medical system is run by 70 per cent Indians. Issues like medicine prices are in the hands of the government, not us. We humbly request the PM to reconsider his remark,” Dr Wankhedkar said.

Meanwhile, AMC has also expressed displeasure over the remark and said that the talk of the PM on a foreign land should have highlighted the “good in India and not the bad.”

“In general, we never talk negatively of our own countrymen, in front of external folks. India is already perceived as being corrupt by many polls and rankings. For our own prime minister to talk about corruption in medical practice on an international platform is extremely hurtful to the medical fraternity in India,” the AMC said in a statement.

The AMC said that by singling out the medical fraternity and painting all with the same brush, the PM has “hurt, brought shame and humiliation to Indians as a whole.”

It also noted that by the statement of Prime Minister Modi, the whole world will look with suspicion at the Indian doctors.

“Stricter pricing control on the pharmaceutical industry is required, and not pointing fingers at the doctors, as we do not control the pricing of medicines or stents. India’s budgetary allocation for health is amongst one of the lowest in the world,” the AMC said.

“The doctors cannot be made scapegoats for the failure of successive governments to provide affordable healthcare to our populace,” it added.

The Mumbai AMC’s Media communication Chairperson Dr Veena Pandit accepted that such practices exist, but raised an objection over putting all the doctors in this category.

“Yes some exist but to paint all doctors as unethical is really bad, that to on a public platform in a foreign country. Failure of successive governments can’t be blamed on doctors,” Dr Pandit said.

He had said that to end the nexus between doctors and pharmaceutical companies, which results in the sale of expensive medicines the Centre has launched generic stores in India.

“Doctors visit Singapore, Dubai to attend conferences; they don’t go there because someone is sick. The pharma companies invite them for that. To finally break the resultant sale of expensive medicines the government has launched generic stores where medicines of similar quality are sold at cheaper prices,” the PM had said.