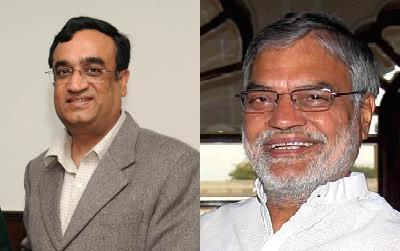 her nearly a decade ago. Soni had also held the charge of CPO earlier.

Madhusudan Mistri, who hails from Gujarat and is considered close to Rahul, got the charge of key Uttar Pradesh with Digvijaya Singh being given the responsibility of Andhra Pradesh, Karnataka and Goa.

Other general secretaries who were dropped included Vilas Muttamwar and Birender Singh. Among the in-charges of various states who failed to get re-nomination were Jagmeet Singh Brar, Jagdish Tytler and Gulchain Singh Charak. Those who have been elevated as general secretaries include Mohan Prakash, Shakeel Ahmed and Luizinho Faleiro who were earlier permanent invitees to the Congress working committee and in-charge of various states.

With Lok Sabha polls less than a year away, Maken has been entrusted with the newly-created communication, publicity and publication wing which will now include the media department of the party. The media department was being handled for the last six years by Janardan Dwivedi.

Priya Dutt will be assisting Maken as secretary with the party appointing as many as 42 secretaries. Maken and Joshi had resigned as Union ministers on Saturday night.

A senior leader remarked that the changes in the organisation showed that this a new generation takeover as the average age of the apex policy making body of the party, the CWC, is now 52 while it was much more earlier.

Rahul, who took over as party vice president in January this year, has kept to himself the charge of front organisations with Prabha Kishor Taviad and Suraj Hegde set to help him as secretaries.

C P Joshi has been entrusted with party affairs in Assam, Bihar, West Bengal and Andaman and Nicobar Islands, while another former Union Minister Gurudas Kamat will look after Gujarat, Rajasthan, Dadra and Nagar Haveli, and Daman and Diu. Besides CPO, Ambika Soni gets Himachal Pradesh, Jammu and Kashmir and Uttarakhand.

Party general secretary Janardan Dwivedi made the announcement about changes in the AICC secretariat ahead of a Cabinet reshuffle.

Faleiro has been made in charge of six northeastern states except Assam, while Mukul Wasnik, who had been in charge of Rajasthan for a record eight years, is now heading South looking after Kerala, Tamil Nadu, Pudducherry and Lakshyadweep.

Hari Prasad retains the charge of poll-bound Chhattisgarh and also gets Jharkhand and Orissa. Mohan Prakash retains Maharashtra as General Secretary and has also been given poll-bound Madhya Pradesh earlier with Hari Prasad. Shakeel Ahmed is the general secretary in-charge of Delhi,

Haryana, Punjab and Chandigarh. This is perhaps for the first time that the party has as many as 12 general secretaries.

Dwivedi will now look after AICC meetings, AICC departments, CWC, organisation as also co-ordination. With Azad no longer the general secretary, Digvijaya Singh will have to handle the tricky issue of Telangana being in charge of Andhra Pradesh.

Dwivedi said that Azad has not found a place as general secretary and Joshi and Maken have now only become general secretaries as the party in its Chintan Shivir in Jaipur had decided that a person should either be in the government or the party.

Senior leader Mohsina Kidwai has just been made permanent member of the CWC as she wrote to Congress President Sonia Gandhi suggesting that she should be given light work due to her advancing age.

Besides Sonia, Vice President Rahul Gandhi and Prime Minister Manmohan Singh, other members of the CWC are A K Antony, Ahmed Patel, Hema Prova Saikia, Sushila Tiriya and all party general secretaries and the treasurer.

The Congress also announced the screening committees for poll-bound Chhattisgarh, Delhi, Madhya Pradesh, Mizoram and Rajasthan. While Joshi has been made the chairman for the Chhattisgarh committee, Union minister V Narainswamy heads it in Delhi. Mistry is the Chairman in Madhya Pradesh, Ajay Maken is in Rajasthan and Mohan Prakash in Mizoram.