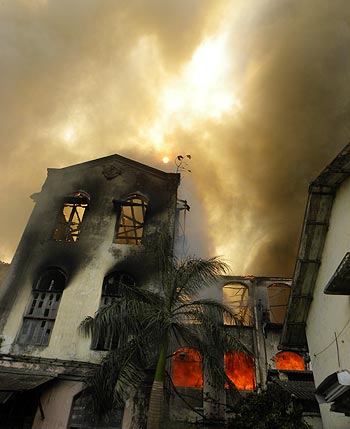 A major fire broke out in a defunct textile mill at Dadar in central Mumbai, enveloping the area in thick smoke even as fire brigade officials suspected foul play in the incident.

Mumbai Mayor Shraddha Jadav also expressed doubt over the fire at Gold Mohur Mill, one of the textile mills to be revived by National Textile Corporation through a partnership with the private sector.

As many as 22 fire engines and ten water tankers were pressed into service to extinguish the blaze that erupted at around 12.00 hours, fire brigade officials said, adding it took over five hours to bring the flames under control.

The nearby areas were vacated following the fire as the mill is located in a commercial-cum-residential area. No casualties have been reported as the mill was shut down, they added.

"The two-storeyed structure consisting of three units had only scrap and no flammable material," said Fire Brigade Chief Uday Tatkare.

However, there were some cylinders kept but not inside the mill. They were stored in the premises, he said.

"The locals raised doubt over the incident as it happened days after the NTC decided to revive it. The circumstances under which the incident took place are questionable. Our preliminary probe also gave us no clue regarding the cause of the fire," he said.

Although the exact reason for the incident was not yet known, the officials present at the site said the fire broke out after some explosions inside the mill premises.

Jadhav said, "Local residents and myself feel that it was intentional. It seems that it was a handiwork of someone who wanted a mall or complex to come up on the land. Thorough probe should be conducted into the matter."

Locals said recently a cloth exhibition was organised inside the mill premises.

The fire erupted at a time when the mill was being revived. The incident needs to be investigated, said Prakash Kale, a resident of the area.

"Earlier too, many defunct mills caught fire. Why such things happen," he questioned.

Image: The fire rages at Gulmohar Mill in central Mumbai.

Our Correspondent in Mumbai