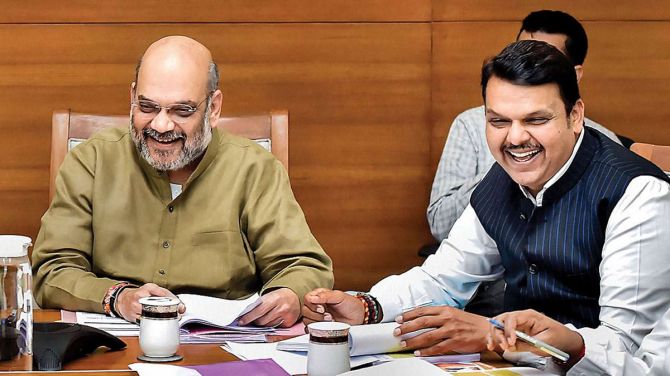 Shiv Sena Chief Uddhav Thackeray on Friday agreed to attend the swearing-in ceremony of Devendra Fadnavis as Maharashtra chief minister after a last-minute call from BJP President Amit Shah inviting him to the event.

Reaching out to a sulking Shiv Sena, Shah's call to Uddhav came a day after the Sena announced its boycott of the grand swearing-in ceremony of Fadnavis on grounds of its "constant humiliation" by BJP over government formation in Maharashtra.

Fadnavis is also understood to have called up Thackeray requesting his presence at the event on Friday evening.

Shiv Sena MP Vinayak Raut said Uddhav Thackeray will attend the swearing-in of Fadnavis after the call from Shah.

Amidst uncertainty over Shiv Sena's role in the formation of the new government in Maharashtra, the party yesterday said its leaders would not attend Fadnavis' swearing-in.

"We have constantly been humiliated by the BJP, which has not gone down well with our MLAs. As our MLAs feel that BJP did not give us due respect, why should we attend the oath-taking ceremony?" Raut had said.

Earlier on Thursday, BJP general secretary Rajiv Pratap Rudy had told PTI that it was unlikely that anybody from Shiv Sena will be sworn in.

"Talks with Sena are on in an amicable atmosphere...but there has been no outcome yet," he had said provoking the Sena to announce its decision of boycotting the event.

Fadnavis, a four-term MLA from Nagpur, will be administered the oath of office later in the day by Governor C Vidyasagar Rao at Wankhede Stadium in the presence of Prime Minister Narendra Modi, several of his Cabinet colleagues, chief ministers of BJP-ruled states, corporate leaders, Bollywood stars and other celebrities.