A case was registered against a 40-year-old man who allegedly made a false claim that he was suffering from COVID-19 in Maharashtra's Thane city, police said on Wednesday. An offence under section 505 (public mischief) of the Indian Penal Code was registered against a Thane resident on Tuesday, senior inspector Kishore Khairnar of the Kasarwadavli police station said.

The man allegedly posted a message on a WhatsApp group stating that he had contracted coronavirus infection and that he did not wish to be admitted to a hospital till his condition deteriorates, the official said.

When the message was brought to the police's notice, a medical team rushed to the man's house for verification and found that he had lied, he said.

No arrest has been made in this connection so far, he added.

The authorities have been taking strict action against rumour mongers and those spreading false information about COVID-19 on social media.

Source: PTI  -  Edited By: Roshneesh Kmaneck© Copyright 2020 PTI. All rights reserved. Republication or redistribution of PTI content, including by framing or similar means, is expressly prohibited without the prior written consent.
Related News: Kishore Khairnar, Kasarwadavli, Maharashtra
SHARE THIS STORY
Print this article 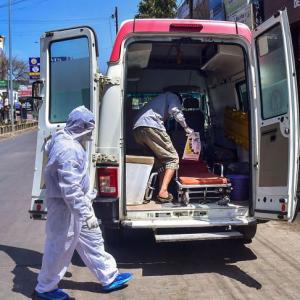