With continuous spike in COVID-19 cases, the Maharashtra government on Saturday decided to extend the ongoing lockdown period till April 30, hours after Chief Minister Uddhav Thackeray attended a meeting with Prime Minister Narendra Modi via video conferencing from Mumbai. 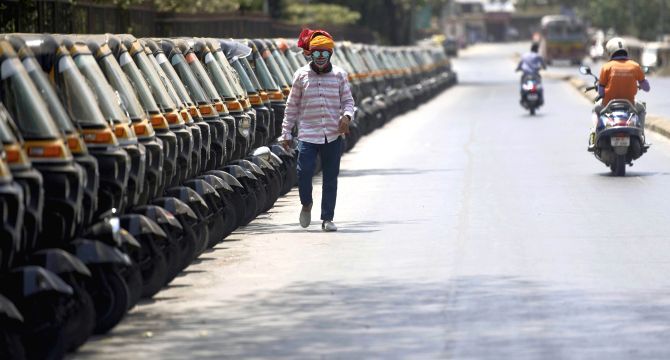 IMAGE: A man wears a full face mask walks past the parked lane of auto rickshaws during the nationwide lockdown against the coronavirus pandemic, in Mumbai. Photograph: ANI Photo

In a live webcast, Thackeray said the lockdown, which was supposed to end on April 14, will be extended till April 30 in view of the lack of any other options.

Explaining the broad contours of the plan, the CM said while restrictions would be eased in certain areas in the state during the extended period, they will become stricter in others.

The CM said he had conveyed this decision to the prime minister during the meeting of all the chief ministers.

Before Maharashtra, Odisha and Punjab had formally extended the lockdown period till April 30.

Thackeray said the decision regarding pending examinations, restarting of industrial units and the migrant workers stranded in the state will be announced before April 14.

He further said that the complete lifting of the lockdown will depend upon how soon the chain of the coronavirus transmission is broken in the most-affected state.

Maharashtra's tally of COVID-19 cases shot up to 1,666 earlier in the day with 92 fresh cases being reported, according to state health department.

The state has so far reported 110 deaths due to the infection while as many as 188 patients have been discharged from hospitals after recovery, officials have said.

"Maharashtra has always shown the path to the country. In the present crisis too, the state will lead in defeating the coronavirus, which has attacked all and not spared even the PM of the United Kingdom," the chief minister said.

Thackeray also asked people not to panic and called for a "continuous the determined" fight against the virus.

The chief minister said the state had so far tested more than 33,000 samples, out of which nearly19,000 were from Mumbai, which he said is the "Gateway to India".

Talking about the cases in Mumbai, which has been hit the hardest by the outbreak, Thackeray said, "60 to 70 per cent of the nearly 1000 coronavirus positive persons in Mumbai have displayed mild or very mild symptoms".

"Those who had unfortunately died had other ailments as well, and most of them had come to hospitals during the last stage (of their illness)," he said.

According to the Mumbai civic body, the tally of COVID-19 cases in the country's financial capital mounted to 993 with 64 deaths, as on Friday.

Appealing to people to work from home wherever possible, the CM acknowledged that there is uncertainty and anxiety all around due to the lockdown.

"The number of coronavirus positive patients is increasing... Everyone is at home and we don't know what to do," he said.

Meanwhile, the CM admitted that some persons who had returned from foreign countries not listed by the Central government for coronavirus check in initial days, were not tested at the international airport.

In an apparent reference to the ongoing political controversy over DHFL promoters Kapil and Dheeraj Wadhawan, who are accused in at least to cases of fraud, and their family members being allowed to travelduring the lockdown period in the state,Thackeray said politics can wait.

"We have the whole life ahead to do politics," he said.

As the controversy raged on, the state government on Friday sent senior IPS officer Amitabh Gupta on compulsory leave and initiated a probe against him for allegedly helping the Wadhawan brothers and 21 others to travel to a hill station amid lockdown.