Rumblings in the Maha Vikas Aghadi camp came to the fore on Wednesday with Maharashtra Congress president Nana Patole accusing ally Nationalist Congress Party of being a "backstabber", a day after the Sharad Pawar-led party joined hands with rival Bharatiya Janata Party in Gondia zilla parishad elections to keep the Congress from power. 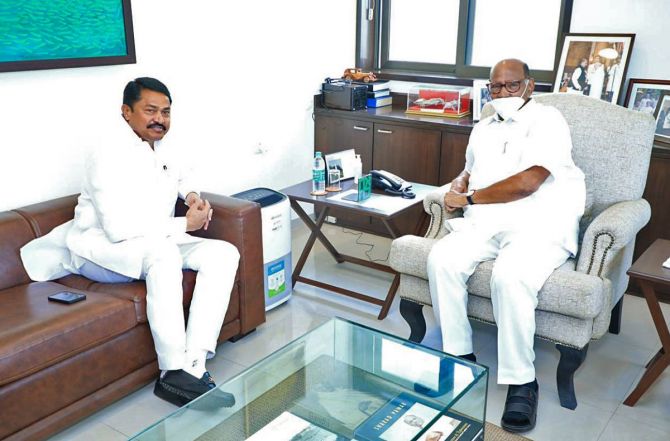 Speaking to reporters in Mumbai, Patole said the Congress high command will be apprised about the "machinations" of the NCP over the last two-and-a-half years in the forthcoming Udaipur conclave.

Patole said friendship should be done with all honesty and that "an enemy attacking openly from the front is better".

He said the MVA, which includes Shiv Sena, NCP and Congress, was formed to keep the BJP out of power.

"Despite being in an alliance, the NCP encroached on Congress in Malegaon, Bhiwandi and several other places. Yesterday, the NCP joined hands with the BJP in the Gondia zilla parishad to elect the president. They have stabbed Congress in the back," Patole said.

He said in the Bhandara zilla parishad, the Congress foiled BJP's attempt to hurt the Grand Old Party.

Patole said the NCP had earlier "encroached upon" the Congress in Malegaon and Bhiwandi despite being in an alliance, which proves that NCP considers Congress as its rival.

"MVA partners Jayant Patil (NCP), Subhash Desai (Shiv Sena) and myself had decided that efforts should be made to ensure that maximum zilla parishads stay with the MVA," the Congress leader said.

Breaking the MVA alliance code, the NCP on Tuesday joined hands with rival BJP to elect the president of the Gondia zilla parishad, keeping the Congress from power with the backing of Independents and a local outfit.

In Bhandara, five rebel members of the BJP led by former MLA Charan Waghmare joined hands with the Congress to elect the party candidate as the president of the ZP. A BJP member was elected as the vice president of the zilla parishad in Bhandara.

Responding to Patole's charge, Maharashtra NCP president and minister Jayant Patil said the allegation raised by the former was ”wrong”.

He said the NCP always wants the three MVA constituents to remain together.

”The party will take note if something different has happened in Gondia as alleged by Nana Patole. But there is also a need to think about who gets along well or shares different opinions at the local level. We will take information on that,” Patil told reporters.

”There may be some problem in (local leaders of NCP and Congress) coming together at the local level due to differences in opinions. We will go into details of this,” he added.

Patil said the NCP never intended to disturb the MVA.

”(Senior NCP leader Praful) Patel is abroad today. Hence I have not been able to communicate with him. It will be right to comment only after seeing in what condition the decision (of NCP and BJP coming together in Gondia) was taken,” he added.