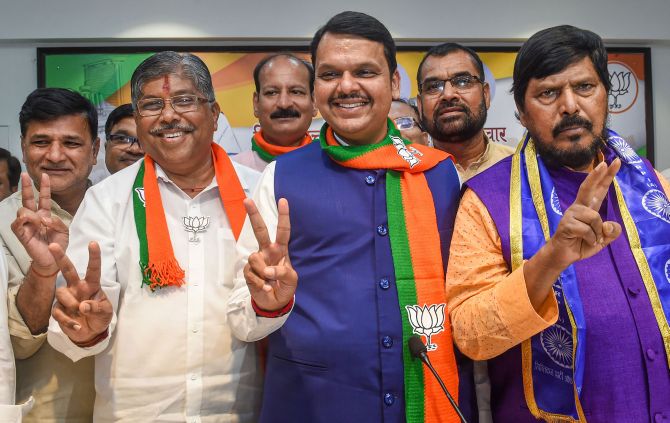 A resolution to the Bharatiya Janata Party-Shiv Sena stalemate over government formation in Maharashtra is expected and a new dispensation may take office before the term of the outgoing assembly ends on November 9, sources said on Wednesday.

Sources from both parties said back channel talks are on between the two old but often-feuding Hindutva allies and a breakthrough is expected.

"We expect a breakthrough. If all goes well we can have a government by November 9," a source, who did not wish to be identified, said.

However, it was not clear as to what will be the concession offered by the BJP to the Sena if the Uddhav Thackeray-led party decides to bury the hatchet.

A senior BJP functionary asserted the party will not compromise on the post of chief minister.

Meanwhile, a delegation of the BJP, the single largest party in the House, would meet Governor Bhagat Singh Koshyari on Thursday.

A delegation of the BJP, to be led by state unit president Chandrakant Patil, will meet Koshyari 'with a message approved by Chief Minister Devendra Fadnavis', senior leader Sudhir Mungantiwar said on Wednesday.

He was speaking to reporters outside Varsha, the official residence of the chief minister.

"The details of the meeting with the governor will be shared with media later," Mungantiwar said.

He also informed that the party has decided to initiate procedure to select a new state unit president.

He said incumbent Chandrakant Patil will remain in the next Cabinet.

"The procedure to select new state BJP chief will be completed by December 31," Mungantiwar said.

The BJP has adopted the policy of one person one rank.

Patil, believed to be a close confidante of party chief Amit Shah, took charge as the state BJP president in July this year.

He held Revenue ministry in the outgoing government.

The BJP and the Sena are locked in a stand-off over the post of chief minister in new government and sharing of ministerial portfolios.

In the recent assembly polls, the BJP won the maximum 105 seats in the 288-member House. The Sena won 56 seats.

Raut told reporters that if the BJP leaders are meeting Governor Koshyari on Thursday, his party was okay with the move.

"We have been saying that the BJP being the single largest party, should form the government," he said.

Uddhav Thackeray hasn't received any proposal from BJP, he said.