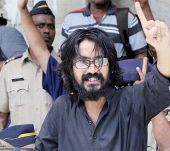 Bowing to public pressure and criticism from the court, the Maharashtra government on Friday informed the Bombay high court that it has decided to drop sedition charge against cartoonist Aseem Trivedi for allegedly insulting national symbols.

"After having a close look at the case, it can be seen that there is clearly no case under section 124(a) of IPC for sedition. Hence the government has decided to drop invocation of the charge against Trivedi," Advocate General Darius Khambata told the court.

A division bench of Chief Justice Mohit Shah and Justice N M Jamdar was hearing a public interest litigation filed by a lawyer Sanskar Marathe against the arrest of Trivedi for sedition for drawing cartoons that allegedly insulted national emblem and Parliament.

The court had at earlier hearings granted bail to Trivedi and come down heavily on the police for arresting the cartoonist on "frivolous grounds" and "without application of mind".

The court had observed that the police action "breached" the political cartoonist's "freedom of speech and expression".

Khambata, however, told the court that out of the seven cartoons drawn by Trivedi the state had found violations in three cartoons.

"Three cartoons we still find are violative of the National Honour Act and Information Technology Act. Proceedings in this will continue against him," Khambata said.

"Arresting him was bad enough but police sought his custody also. That was more shocking," Chief Justice Shah said.

The bench said had the arrest not been made no one would have known about those cartoons and the cartoonist.

"In order to prevent such cases in the future the court should hear this matter on scope of section 124(a). The state government has proposed to come out with a circular indicating the limitations and parameters of the said section," the court said.

The bench has directed the government to submit a draft circular by October 19.

"The circular is required as it will percolate to lowest rung of police. Our judgments on the sedition charges are not read by them," Chief Justice Mohit Shah said.

The police in an affidavit submitted today said the action was based on legal opinion provided to them.

"Opinion was sought by the Bandra Kurla police station from the assistant director of public prosecutors on whether an offence is made out against Aseem. The assistant director in a letter dated January 10 advised invocation of section 124 (a)," the affidavit filed by assistant commissioner of police Ganyansingh Padwal said.

Hearing the matter on September 14, the court had said it intended to lay down certain parameters for application of the law of sedition.

"If there are no parameters there will be serious encroachment of a person's liberties guaranteed to him in a civil society," it had said, adding the sedition law was a pre-independence provision when government wanted protection from its own citizens.

Directing the police to file a comprehensive affidavit by October 12 explaining the grounds on which the charge of sedition was applied, the court had said, "Today you attacked a cartoonist, tomorrow you will attack a filmmaker and then a writer. We live in a free society and everyone has freedom of speech and expression."

The Kanpur-based cartoonist, associated with Anna Hazare's anti-corruption movement, was arrested on September 8 for allegedly posting seditious content on his website and insulting national symbols.

Amid mounting public outcry, he was remanded in judicial custody on September 10 till September 24, after police said it no longer required his custody and Trivedi refused to seek bail.

However, the high court granted him bail two days later.

The city police had come under fire from activists and politicians including BJP leader L K Advani who likened his arrest to conditions prevailing during Emergency.