Maharashtra Chief Minister Eknath Shinde reviewed the rain situation on Tuesday and said over 3,500 people had been shifted to safer places from flood-prone and vulnerable spots across the state, where several districts, including Mumbai, experienced downpour. IMAGE: A view of a closed Andheri Subway as it gets heavily waterlogged due to heavy rainfall, in Mumbai on Tuesday. Photograph: ANI Photo

He said National Disaster Response Force (NDRF) teams have been been deployed wherever required and more personnel will be sent if needed.

The CM, who took charge less than a week ago, said he has asked government officials to give utmost priority to preventing loss of lives in rain-related incidents.

He was speaking to the media after reviewing the rain situation during a visit to the Brihanmumbai Municipal Corporation's disaster control room.

The state has been witnessing heavy rains since Monday, with water-logging reported from urban areas, including Mumbai, while the level of some rivers was rising rapidly.

During his visit to the BMC headquarters a day after winning the floor test in the Assembly, Shinde said he had spoken to the collectors of Raigad, Ratnagiri and some other districts for which the India Meteorological Department had issued 'red' and 'orange' alerts predicting very heavy to extremely heavy rainfall.

Authorities have been directed to shift people from spots that are vulnerable to landslides so as to avoid loss of lives, the CM said.

He said over 3,500 people had been shifted to safer places so far in the state. "I told the chief secretary in the morning to direct all guardian secretaries to visit their respective districts and coordinate between the NDRF, the Air force, the Navy and other departments," Shinde said.

He said water levels have gone down at some places in the state due to reduction in rain intensity.

"A red alert has been issued for Raigad and Ratnagiri districts (indicating heavy to extremely heavy rains). Therefore, the administration has been asked to take necessary steps and all response systems have been put in place," Shinde said.

The CM was impressed with the disaster control room of the BMC as almost every spot in the city could be tracked live with the help of over 5,700 CCTVs on a real time basis.

He said this time there was no water-logging in central Mumbai's Hindmata area, a chronic flooding spot, and road traffic there was smooth. This was possible due to various efforts taken by the civic body.

Hindmata is one of the lowest lying areas of Mumbai and amongst the first to get waterlogged during the monsoon.

The Chief Minister said even a moderate rainfall adversely affects suburban train services in Mumbai as there are 25 vulnerable spots which get flooded quickly.

To a question about the incidents of building collapse in Mumbai, Shinde appealed to citizens living in dangerous building to co-operate with the civic administration and the government.

Interestingly, some ex-BJP corporators welcomed the chief minister during the visit, but none from the Shiv Sena was present there. 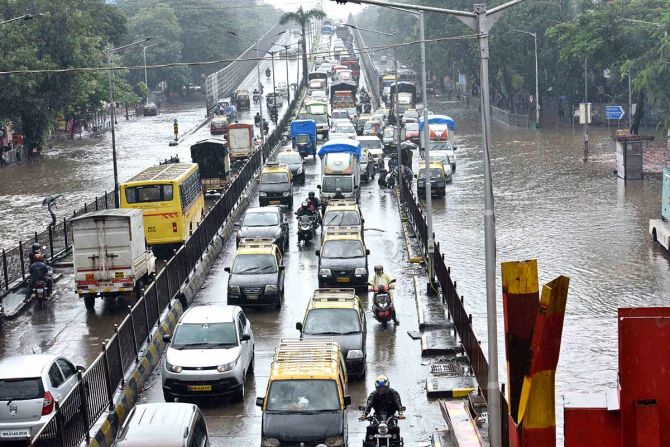 Mumbai's Powai Lake began overflowing on Tuesday evening amid heavy rains for the past couple of days, a civic official said.

The lake has a storage capacity of 545 crore litres and started overflowing at 6:15 pm, he added.

Located some 27 kilometres from the BMC headquarters, Powai lake was built in 1890 at a cost of Rs 40 lakh.

According to BMC officials, the stock in the seven reservoirs supplying water to the city is about 15 per cent at present, while it was over 18 per cent on July 5 last year.

Incidentally, the civic body had imposed a 10 per cent water cut last month due to insufficient stock caused by deficient rainfall.