The death toll in rain-related incidents in Maharashtra rose to 192 on Monday after the recovery of 28 more bodies, most of them in Raigad, the state government said, while Deputy Chief Minister Ajit Pawar toured flood-hit villages in Sangli district and said a decision on providing financial relief will be taken in a couple of days. 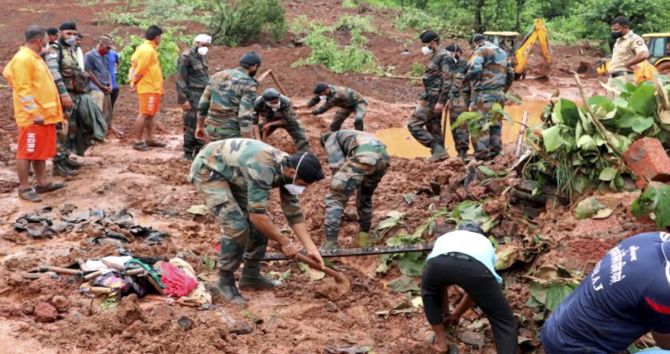 As many as 48 persons were injured in these incidents and 25 still missing, while so far, 2,29,074 persons have been evacuated from the flood and rain-affected affected areas and moved to safer places, the government said in a statement in Mumbai.

Giving the district-wise break up of fatalities in heavy rains and floods since last week, the official statement said Raigad has reported 95 deaths, Satara 45, Ratnagiri 21, Thane 12, Kolhapur 7, Sindhudurg, Akola, Pune and Wardha 2 each, and Mumbai 4 (total 192).

The administration of Raigad, the worst-hit district located in the coastal Konkan region, earlier on Monday called off the search operations for 31 missing people in Taliye village which was ravaged by a massive landslide after heavy rains last week, Collector Nidhi Chaudhari said.

The village, located in Mahad taluka of Raigad, witnessed the deadly landslide last Thursday after heavy rains, flattening several houses in the area.

The collector said the decision to call of the search operations was taken after seeking opinion of the National Disaster Response Force (NDRF) and the disaster response forces of the state and neighbouring Thane district.

"The rescue operations have ended officially. We have withdrawn our teams from Taliye. The 31 missing will be declared dead following the due process...relatives of the missing people demanded closure of the operations since yesterday," the collector said earlier in the day.

Chief Minister Uddhav Thackeray visited the village on Saturday and said as landslides proved fatal in many parts of the state, the government would come up with a plan to permanently relocate people living in hilly areas.

A decision on providing relief to the people affected by floods will be taken in the next couple of days, Deputy CM Ajit Pawar said after he toured various rain-hit villages in Sangli district and used a rescue boat to reach out to victims in some areas on Monday.

He interacted with the flood-affected people and assured them of rehabilitation and help from the state government.

"The Maha Vikas Aghadi government will provide all possible help to those who have been affected by floods. I, cabinet ministers Jayant Patil, Vijay Wadettiwar, and minister of state Vishwajeet Kadam visited the flood-affected areas in the Sangli district and took stock of the situation.

"In the next two days, a final decision about (the relief) will be taken in the presence of Chief Minister Uddhav Thackeray," Pawar, who also holds the Finance portfolio, told a press conference.

Water Resources Minister Jayant Patil, Relief and Rehabilitation Minister Vijay Wadettiwar and Minister of State Vishwajeet Kadam accompanied Pawar during his visit to the flood-battered Bhilwadi and other areas of the district.

They used a boat to reach out to people affected by the monsoon mayhem in Bhilwadi.

"When heavy rains started after July 22, there was enough storage capacity in dams in the Krishna river basin but heavy downpour in the pre-catchment areas of dams caused floods downstream," he said.

Pawar described the pre-catchment area of the dam as the area ahead of the dam's wall. He added that since its construction, the Koyna dam never received such a huge influx of water.

"Around 16.5 TMC water was received in one day in the Koyna dam which has the storage capacity of 100 TMC. There is a place near Koyna called Navja, where 32-inch rainfall was witnessed," he said.

Pawar said the work to assess losses caused due to floods is still not completed.

"Real picture about the damage caused to crops and farms will emerge after the water recedes. I have instructed the district administration to continue with the assessment of losses at new places," he added.

Speaking about landslides, Pawar said such incidents were reported from the areas that were not prone to landslips.

Responding to a query, Pawar said there was good coordination between the Centre and the Maharashtra government in managing the flood situation.

"To avoid flooding in the future, emphasis will be given on strengthening the flood management system. I have received some suggestions to have SDRF (State Disaster Response Force) centres in flood-prone districts so that when such a situation arises, these groups can be pressed into action instead of waiting for help from agencies like the NDRF, Army, Coast Guard and Navy," he said.

Asked whether the current flood situation in western Maharashtra is a 'man-made' crisis, Pawar dismissed such contention, saying "unprecedented" rainfall in "pre-catchment" areas of dams led to the scenario.

Pawar reiterated the state government was willing to rehabilitate people who often get affected by floods in hilly areas.

He asked the Sangli district administration to conduct a survey of such houses and also check the land availability for rehabilitation.

He said that 'VVIP tours' will now start in the flood and landslide affected areas and directed respective district administrations to appoint 'nodal officers' for coordinating such tours so that district collectors, SPs, CEOs of ZPs can focus on the main work to manage the situation once floods recede.

Pawar underlined the need to exercise caution to prevent floods citing the IMD prediction of heavy rains in August given that dams have almost reached their fullest capacity in July itself.

Pawar then headed towards Satara district, also hit by heavy rains and flood, to review the situation there.

Earlier in the day, the Krishna river was flowing at 52.11 feet at the Irwin bride in Sangli at 11 am, as against the danger mark of 45 feet, an official said.

Chief Minister Thackeray on Sunday visited Chiplun, the site of severe flooding in Ratnagiri district in the Konkan region, and interacted with residents, businessmen and shopkeepers.

He promised them all help from the state government.

On Monday, the chief minister was scheduled to visit flood-hit Patan taluka in Satara district, but had to cancel the tour due to rough weather, an official said.

Thackeray was to take a helicopter from Pune to Koynanagar and conduct an aerial survey of the affected areas.

He was also scheduled to meet the affected people at a shelter camp set up at a zilla parishad school in Koynanagar.

An official in the Chief Minister's Office said Thackeray's tour was cancelled due to 'inclement weather'.

Meanwhile, four days after suspension of train traffic on some routes near Mumbai due to heavy rains, all rail lines in the Thal and Bhor Ghat areas of neighbouring Thane, Nashik and Pune were restored on Monday morning, a Central Railway (CR) spokesperson said in the state capital.

The CR had suspended traffic at the Thal Ghat, which is also known as the Kasara Ghat, from 10.15 pm on July 21, while traffic at the Bhor Ghat, popularly called the Khandala Ghat, was suspended at 12.30 am on July 22, following heavy rains, landslides, tree falls and mudslides at multiple locations.