The number of deaths due to flooding, landslides and other rain-related incidents in parts of Maharashtra reached 113 on Sunday with one more casualty reported in the last 24 hours, while 100 people were missing after the monsoon fury, the state government said. 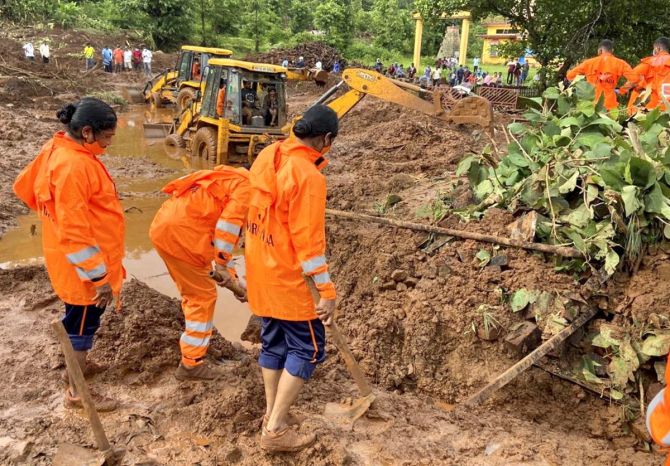 So far, 50 people have also been injured in these incidents, the government said in a statement.

On Sunday, Chief Minister Uddhav Thackeray visited Chiplun, the site of severe flooding in Ratnagiri district of the Konkan region.

A group of locals stopped the CM's convoy and informed him about the problems they were facing following the rain havoc in the area.

The chief minister interacted with residents, businessmen and shopkeepers, and promised them all help from the state government to restore normalcy in the area.

Thackeray said they will require "central assistance for long-term mitigation measures", and added that he will tour western Maharashtra on Monday and a comprehensive data of the extent of damages will be prepared.

Union MSME Minister Narayan Rane visited Taliye village in Raigad, the site of a massive landslide on Thursday, and said Prime Minister Narendra Modi has asked him to submit a report on the damage caused by the rains.

Rane said damaged houses would be rebuilt under the Pradhan Mantri Awas Yojana after suggestions are taken from local residents.

In the last 24 hours, one death was reported from Pune and one person was reported missing from Thane district, the state government said.

The government said 52 deaths were so far reported in Raigad, 21 in Ratnagiri, 13 in Satara, 12 in Thane, seven in Kolhapur, four in suburban Mumbai, and two each in Sindhudurg and Pune.

A total of 875 villages in Kolhapur, Sangli, Satara and Pune were affected by the torrential rains, while 1,35,313 people were evacuated to safer places, it said.

Around 2,000 people were lodged at six relief camps in Ratnagiri, the release said.

A bridge on the Vashisthi river in Chiplun had earlier got damaged following heavy downpour.

Thackeray, while talking to reporters after a review meeting in Chiplun, said the economy was "sluggish" because of the COVID-19 pandemic.

"We will require central assistance for long-term mitigation measures. The central government has provided assistance by deploying rescue teams from defence forces," he said.

The chief minister said he will tour western Maharashtra on Monday and a comprehensive data of the extent of damages will be prepared.

"We will provide all assistance," he assured.

Thackeray said there will be no technical difficulty in providing assistance to the affected people.

Some residents of Chiplun, who had stopped Thackeray's convoy, later told reporters that they informed the chief minister that they need immediate relief, and not assurances.

"We have lost everything in the flood. For the last three days, no one came to conduct the panchnama (spot inspection). Now, with the water level receding, we are clearing the debris from our homes and shops. If the officials come later and find our area clean, will they give us compensation?" asked a woman who met the CM.

Some residents said had the local administration alerted them about the flood in advance they could have saved 50 per cent of their belongings.

"All of us here have lost everything. We could save our lives only and nothing else. Our shops are not insured," a shopkeeper said.

Recalling the horror of the flood, another resident said, "We noticed that water levels were rising due to heavy rains at 2 am (on the intervening night of Tuesday and Wednesday). Within two to three hours, the water level rose to 10 to 15 feet. We somehow saved our lives but our belongings and houses were damaged".