A political slugfest broke out in Maharashtra over home minister Anil Deshmukh's allegation that phones of Congress-Nationalist Congress Party leaders were tapped by the previous Bharatiya Janata Party regime during 2019 Lok Sabha and assembly polls as ex-chief minister Devendra Fadnavis stoutly rejected the charge on Friday. 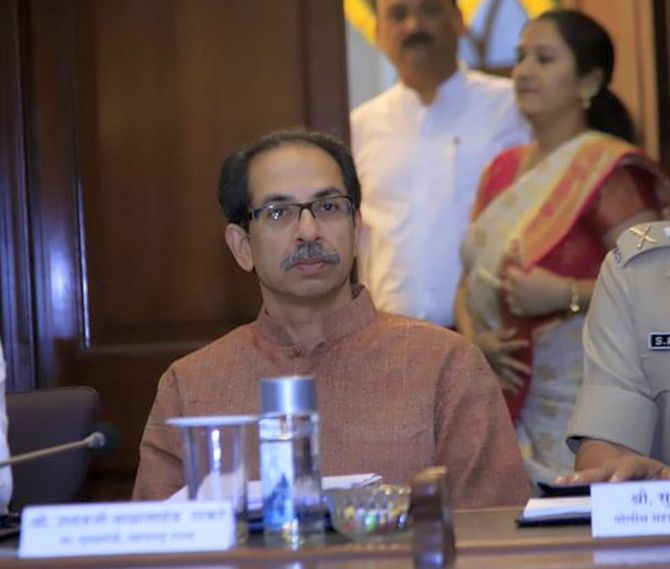 A day after Deshmukh made the sensational claim and ordered a probe, Fadnavis, the then chief minister who also held the home portfolio, asserted phone tapping was not the culture of the state and his government had not given any such orders.

Fadnavis pointed out that a Shiv Sena leader was the Minister of State for Home during his tenure.

The Congress, a key constituent of the Maha Vikas Aghadi government, joined the NCP in attacking the BJP and demanded a high-level inquiry into the entire episode.

"The previous BJP-led government had tapped phones of senior NCP and Congress leaders through government mechanism ahead of the Lok Sabha and assembly polls held last year," Deshmukh alleged.

He said there are also allegations that the then government had sent some officials to Israel and brought software to "intercept" phones of leaders of the Congress and the NCP, which were then in opposition.

Deshmukh did not name the NCP and Congress leaders whose phones the Devendra Fadnavis-led government had allegedly tapped.

"They had stooped low in politics. We have initiated probe into it," the NCP minister said.

Speaking with the media in Bhandara district in Vidarbha on Friday, Deshmukh reiterated the phone-tapping allegations against the BJP-led government.

"The BJP government, before the polls, tried to gather information about what and with whom these (NCP-Congress) leaders were talking to," he said.

Shiv Sena MP Sanjay Raut on Friday said a BJP leader had informed him that his phone was being tapped by the Fadnavis government, in which his party was an ally.

"A BJP leader had told me that my phone was being tapped. I said if anybody wants to listen to what I am saying I welcome it. I am Balasaheb's 'chela' (disciple), whatever I do, I do it openly," Raut told reporters.

"In spite of the phone-tapping, we formed the government in Maharashtra," he said.

The Sena formed government with the Congress and the NCP in November last year after snapping its alliance with the BJP.

On Thursday, Deshmukh had alleged the Fadnavis dispensation misused government machinery to tap the phones of opposition leaders, especially during the formation of the MVA government in November.

"The cyber cell of the Maharashtra police has been asked to look into the various complaints of snooping/phone tapping that came in during the previous government," Deshmukh had said.

Housing minister Jitendra Awhad, an NCP leader, on Friday said the phone tapping episode smacks of "sick mentality" of the BJP and added it should be probed as to why the previous government did so.

"I only had levelled the allegations. Why you want to poke into the people's private life? There are political and ideological differences between us, but not personal. Maharashtra should know who is behind this," he added.

PWD minister and Congress leader Ashok Chavan alleged the BJP could stoop to any level to get power. He demanded a high-level inquiry into the phone tapping allegations.

"The allegations of tapping of phones of Congress, NCP and Shiv Sena leaders during the Fadnavis regime were serious. The chief minister should order a high level probe into the allegations," Chavan said.

The BJP's agenda was to secure unlimited and unbridled power, the Congress leader alleged.

Unperturbed by the allegations, Fadnavis said the MVA government was free to conduct an inquiry into the matter.

"Phone-tapping is not the culture of Maharashtra. My government had not given any such orders," Fadnavis, now the Leader of Opposition in the Assembly, said in a statement.

"The whole country knows the credibility of those who have levelled such allegations," Fadnavis, who was the chief minister of the state between 2014 and 2019, said.

"The state government is free to probe the allegations with the help of any machinery. People of Maharashtra know the truth. A Shiv Sena leader was the minister of state for home during my tenure," he added.

"I have a request - the government should immediately conduct an inquiry and make the report public. If it wants to go to Israel for the probe, it should do that," he said.