Maharashtra Chief Minister Eknath Shinde was given a warm welcome by the rebel Shiv Sena MLAs and other legislators in the wee hours of Friday when he returned to a luxury hotel near Panaji, where they are staying, after taking oath for the top post. 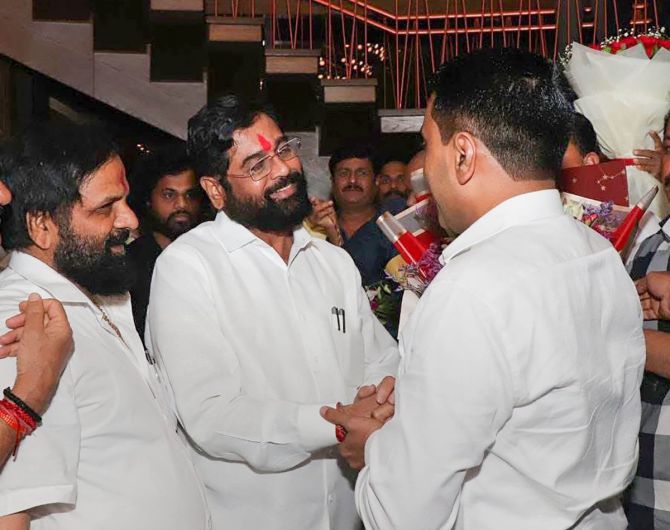 Shinde flew to Goa from Mumbai and arrived at the hotel located at Dona Paula near Panaji around 1.30 am.

The Maharashtra legislators have been camping at the hotel since Wednesday night after their arrival from Guwahati.

While Shinde had arrived with them, he went to Mumbai on Thursday and was sworn in as the 20th chief minister of Maharashtra, while Bharatiya Janata Party stalwart Devendra Fadnavis took oath as the deputy chief minister.

When Shinde returned to the hotel after the swearing-in ceremony, the rebel Sena MLAs and independent legislators were seen hugging him and raising slogans in his support.

A few women legislators, who are also part of the faction, welcomed him with traditional rituals.

Goa Chief Minister Pramod Sawant, who was also at the hotel when Shinde arrived, offered a bouquet of flowers to congratulate the latter.

A video of the welcome given by the MLAs also went viral on social media.

Ever since the news of Shinde's appointment as the new Maharashtra chief minister broke, the MLAs were in a jubilant mood.

They broke into a dance in the lobby of the hotel on Thursday when they heard that Shinde was going to be the next CM.

A video showed rebel MLAs dancing to the tune of Marathi songs.

Shinde's swearing-in ceremony was screened live on a big screen at the hotel on Thursday evening.

Sources said that after his arrival, Shinde held an informal meeting with the MLAs.